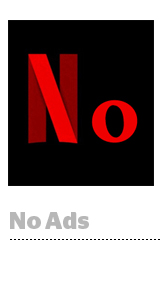 Holding your breath on ads coming to Netflix? Time to let it out.

There will be no advertising on Netflix anytime soon if ever, the company said in a letter to shareholders on Wednesday in advance of its second quarter earnings call.

“We, like HBO, are advertising free. That remains a deep part of our brand proposition,” the letter stated.

“When you read speculation that we are moving into selling advertising, be confident that this is false.”

Netflix is eschewing ads not because they aren’t potentially lucrative, but because it sees the user experience as more important than any potential revenue.

“We believe we will have a more valuable business in the long term by staying out of competing for ad revenue and instead entirely focusing on competing for viewer satisfaction,” Netflix said in its letter.

Alternatively, advertising-supported streaming services, like the one NBC is cooking up with content it’s removing from Netflix, such as “Friends” and “The Office,” are hoping that viewers will have room in their hearts for a platform that doesn’t gouge their wallet.

Netflix, however, is capable of growing margins without a dual revenue stream of subscriptions and ads, said CFO Spencer Neumann during the call.

The company expects to add around $5 billion in incremental subscription revenue this year, almost all of which is gross margin.

“What we want to do is keep that engine going, keep that subscriber engine going, and not get distracted with alternative revenue sources which just don’t add up when you’re growing $5 billion a year,” said CEO Reed Hastings.

Which is why Netflix plans to do more licensing and brand tie-ins. The third season of “Stranger Things,” released this month, has prominent integrations with Coke, Nike, Burger King and Baskin Robbins.

Netflix is bullish on how tie-ins will have a positive knock-on effect on subscriber growth. If people are excited about the new season of “Stranger Things,” they’ll join Netflix and tell their friends to join, said Hastings.

It’s unlikely, though, that all of Netflix’s original programming will lend itself as easily to brand partnerships as “Stranger Things” does with its built-in nostalgia.

Netflix reported a significant drop in subscriber growth during Q2, adding just 2.7 million subscribers, far below its guidance of 5 million. US subscribers decreased by 100,000, despite expectations that they would grow by 300,000.