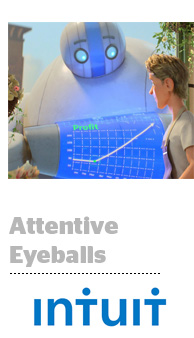 Connected TV: Intuit is getting into it. But the financial software company is not giving up on television’s biggest tentpoles.

“We’re doing the blocking and tackling of strong reach and awareness building, but we’re mixing it with more experiential and digital,” said Lauren Stafford Webb, Intuit’s VP of brand marketing.

A balance between traditional and digital is “critical to reach our target where they are – and in a place where we can get attentive eyeballs,” she said, noting that CTV is a way to “complement what is happening live.”

But the goal is to reach a broad audience of financially active and aware 18 to 54-year-olds who are “technology inclined” and involved in managing their daily finances. And, in some cases, the most effective way to get that sort of broad reach is to hit people when they’re sitting on a sofa in a living room.

For the past year, generating reach and awareness have been top of mind at Intuit, which is in the midst of an ongoing multiphase video-centric brand campaign.

While most consumers are familiar with Intuit products such as TurboTax, Mint and QuickBooks, the parent company hasn’t garnered the same kind of brand recognition. Despite the slow-moving secular shift away from TV, televised cultural touchstones still attract the scale and attentiveness necessary for that kind of brand building.

But Intuit first launched its brand campaign across digital channels last year, including YouTube, Facebook and Hulu, with a four-minute animated film. On YouTube, that film has 21 million views and counting, which is better than the average movie trailer, Stafford Webb said.

Next, Intuit added television, with a second animated ad that ran in January during the two NFL conference championships, which each have nearly the Super Bowl’s audience size. (Intuit is an official sponsor of the games). A third animated short debuted during the 61st Annual Grammy Awards on Sunday evening.

Just shy of 20 million people tuned in to the Grammys, according to Nielsen. That’s the second smallest tune in for the awards show in a decade, but it’s still a very sizable audience.

“We see these as marquee moments,” Stafford Webb said. “Because it’s one thing for us to talk about finances, but it’s another to actually show up in places with cultural relevance.”