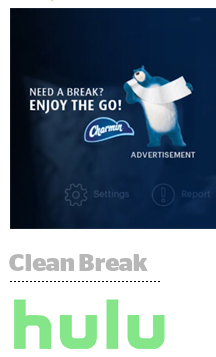 Hulu viewers will soon start seeing ads when they hit pause on a show.

Coca-Cola and Charmin are on tap to test the so-called pause ads, which allow advertisers to run static display ads on screen when viewers take a break. The ads, in development for most of 2018, will roll out with beta advertisers in Q2 on select Hulu content.

AT&T’s ad unit Xandr has a similar offering in the offing.

The brief moment between pause and play can be a potent and noninvasive ad opportunity, said Jeremy Helfand, a VP and head of ad platforms at Hulu.

“A pause is a natural break in the viewing experience,” Helfand said. “You can catch the attention of the viewer, but do it in a non-disruptive way, and then, when the person hits play, the ad disappears right away.”

While most advertising is disruptive on purpose to grab attention, the TV streaming environment calls for a different approach, Helfand said.

“The way we consume content has changed, but TV advertisers really haven’t kept pace,” he said.

Around 50% of Hulu’s top content is consumed in binge mode, meaning three or more episodes down the gullet in one sitting. Rather than breaking that magic with an ad, a pause is viewer initiated and doesn’t impinge on the content experience.

Although Hulu hasn’t quantified exactly how much pausing goes down during an average binge, “we know it happens regularly,” Helfand said.

Advertisers will be able to target pause ads by audience and genre for now, with the potential for content targeting down the line. Using AI, for example, Hulu could examine the show’s metadata to determine what’s happening in the scene that precedes or follows a pause.

For brand safety purposes, pause ads will not appear on any mature content.

In terms of reporting, advertisers will get impression counts to start, with other metrics – viewability, for example, or engagement – to come as Hulu evaluates how the unit is landing with viewers.

But success isn’t guaranteed without the right creative for the pause environment, Helfand said. The main takeaway from extensive user testing in 2018 was this: Be subtle, be succinct and be static.

“Users were strongly against video as a format,” Helfand said, “largely because it’s jarring if someone pauses content and then another video starts playing, but also because it makes no sense to show a video ad to someone who’s probably about to walk away from the screen.”

“We see this as part of a bundled opportunity,” he said, “a part of the portfolio of solutions that advertisers can buy from Hulu.”

But that bundle is going to evolve over the near term. Hulu wants 50% of its advertising revenue – which the company says just hit nearly $1.5 billion – to come from non-disruptive formats within three years. (Hulu doesn’t break out how much of its ad revenue is derived from those types of formats today.)

Expect more formats like pause ads to roll out in the year to come, Helfand said. Better ad experiences, automation and measurement are all part of Hulu’s long-term three-pronged “innovation agenda” for advertising.

“Viewers expect advertising to be less intrusive, more relevant and also integrated into the overall experience when they’re watching television,” Helfand said. “Brands realize they need to rise to the challenge if they’re going to break through the fragmentation of attention that’s happening in TV viewing.”