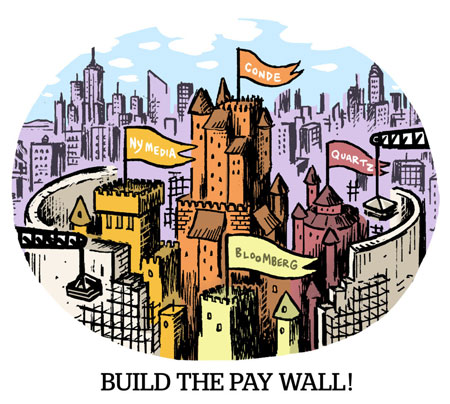 BuzzFeed, Verizon Media and Gannett all had layoffs this week, as the media business struggles to find its way in a digital climate.

Most companies won’t go bankrupt, “but they will have to deal with the realities of 2019,” Smith said.

Cheddar’s Steinberg said layoffs help companies stay competitive and keep their strongest workers. “Outperformers are promoted and given raises and equity, and underperformers are fired on a routine basis,” he said, noting that he denies an increase in headcount whenever possible in order to keep costs in check, even though his company is growing.

In order to survive, media companies are trying to create enough value that audiences will pay for it.

While Condé Nast this week revealed its intention to paywall all of its publications by the end of the year, it’s arguably late to the game.

Bloomberg, Cheddar and New York Media all have paid products. New York Media recently implemented a dynamic paywall to encourage readers to pay for its content.

“Places like The New York Times are teaching our audience you pay for high-quality content,” Wasserstein said. The publisher also redesigned its homepage in order to help readers understand how its “sister” brands – The Cut, Intelligencer, Vulture, Grub Street, The Strategist – fit together.

Bloomberg added a paywall last year, and priced it “at the high end,” or $35 a month. “We’ve had to triple our internal forecasts,” Smith said. The publication knew its audience: people who don’t use the Bloomberg Terminals, but care deeply about business news, whether they’re in business school or the C-suite.

Cheddar launched with the idea of having OTT platforms pay carriage fees for its content, but skinny bundles wanted to shed costs and just weren’t willing to pay for its channel.

“They all want to lower their content costs, and I’m looking for high-quality distribution,” Steinberg said. “I like to say that everyone pays for Cheddar, we just happen to not get any of that money.”

(He avoids Facebook, which he said was incredibly frustrating to work with: “All our platform relationships are great except for Facebook.”)

Almost all publications have niche audiences these days – especially compared to the massive, generalized user bases of Facebook and Google.

Despite amassing scale that advertisers wanted, BuzzFeed and Huffington Post struggled because Facebook and Google provide even more reach at lower cost.

“All the legacy measurement systems, and the Madison Avenue business model, was based on a different type of scaled advertising,” he said.

So publishers really need to think about how to attract brand dollars. Cheddar, for instance, has packages focused on brand advertising that performs.

Starting at $150,000 a month, brands get 24 minutes a month in content segments, a year-long license to use the content, surveys to prove out brand lift and guaranteed media on Facebook, Twitter and LinkedIn, he said. Because those packages perform, renewals average over 80%.

Bloomberg’s Smith questioned whether Cheddar can offer that much to advertisers and be profitable.

“Absolutely,” Steinberg said, noting he runs with just 180 employees and lost $4 million on $27 million in revenue. Cheddar turned a profit in November 2018 and would have in December, had dollars not shifted their budgets over to 2019, he said.

To be successful in the future, publishers should still create the niche content that draws audiences – for which they might even pay a subscription fee. But publishers must find new and creative ways to monetize those passionate audiences, to entice brands to connect with them and complement their platform advertising.

“There has never been a more intense imperative to continually reinvent yourself and innovate.” said Bloomberg’s Smith. “As Facebook and the platforms have dominated the broad, scaled advertising market, publishers are going to need to niche-ify themselves.”