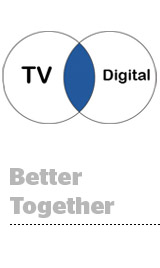 Nielsen Catalina Solutions is teaming up with Facebook on a cross-media measurement product that aims to analyze how the combination of digital and TV drive incremental sales lift for CPG advertisers.

“The biggest ask from all advertisers has been to help them with comparability,” said Fred Leach, director of marketing science at Facebook, Nielsen Catalina’s launch partner. “They know Facebook works, but they want to understand how it works in comparison with all of the other activities they’re doing.”

In its kickoff study with Facebook, Nielsen Catalina found that, in most cases, a combination of TV and Facebook exposure resulted in the best return on ad spend, although some campaigns that brought the two together resulted in flat ROAS.

But the lack of a cross-platform boost could be because creative or the messaging just weren’t up to snuff, Wood said.

Although frequency had some effect on incremental sales lift, ROAS was highest when TV and digital ads worked in tandem regardless of how many times a consumer saw an ad.

“We see strong synergy when you bring two media together,” Wood said.

For the moment, the impact studies only include news feed ads, although Leach said the hope is to measure the cross-media effect of Instagram and Audience Network – but that can be quite tricky.

It’s complex enough comparing exposed and unexposed people within the context of a single publisher.

“There is still research and development that needs to be done, particularly on the NCS side, to do more sophisticated cross-publisher comparison,” Leach said.

NCS’s is testing its cross-media solution with select advertisers in an invite-only closed beta. The plan eventually is to let other digital publishers use the platform to prove their value in the cross-media marketing mix.

Nielsen Catalina and Facebook have been partners since September, when Facebook announced a series of third-party partnerships, including with Oracle Data Cloud, Visual IQ and Neustar MarketShare.

The work with NCS is part of a broader push within Facebook around transparency in response to industry pressure. In January, Facebook rolled out marketing-mix modeling across Instagram, Audience Network and the news feed, and last month Facebook committed to an independent audit by the Media Rating Council.