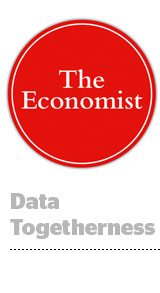 The Economist collects plenty of data, but until recently each type, including browsing or subscriber data, could only be analyzed in a vacuum.

That meant The Economist didn’t know the types of content viewed by its most loyal subscribers and couldn’t identify the behavior of readers at risk of dropping their subscriptions.

For advertising, those silos limited the type of targeting The Economist could offer. Its data management platform (DMP) contained behavioral data, such as people who read technology content voraciously. But the publisher couldn’t easily overlay those behavioral patterns with its first-party subscriber data because onboarding it would have required pulling and combining from multiple data-storage sites.

The Economist progressed beyond those limitations a year ago when it brought on Looker, a business intelligence tool that knits together data sources and makes them easier to understand in context.

When The Economist first used the tool, it focused on improving subscriber retention. Because it could marry content behavior with subscription data for the first time, it learned that new subscribers who engaged with its app or email newsletter were more likely to renew their subscriptions than those who didn’t.

“Before we weren’t investing in pushing people to the app,” said Bobby Gill, data and digital analytics director at The Economist. “And you would never be able to run that analysis.”

To act on this insight, The Economist is testing ways to increase readers’ engagement with its app and newsletter. It’s using Looker data analyses to determine which of the controlled tests work.

Using Looker on the media side of its business is the next frontier. Critically, the tool enabled the advertising team to combine its DMP data and first-party subscriber data more easily, allowing for richer data and expanded cookie pools of users to target. The Economist is also overlaying third-party data sources like BlueKai to enrich its data.

His team is working with business areas to identify use cases where the data will help – and make The Economist an even more data-driven publisher.