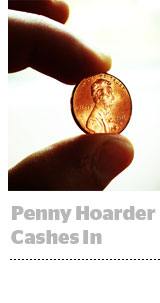 Millennials in search of a side gig read The Penny Hoarder to find ways to make extra money and save.

The site earned $20.8 million last year by focusing on native, affiliate marketing. It earns 95% of its revenue from affiliate and performance campaigns, and less than 5% from display advertising.

And it expects to double revenue again in 2017. Uber, General Mills and Credit Sesame advertise on the site, representing the gig economy, CPG and fintech, respectively.

In 2015, The Penny Hoarder founder and CEO Kyle Taylor opened an office and hired a staff. The editorial team numbers 40, and the advertising and business team brings the total staff to 60.

The Penny Hoarder writers first try out the products being advertised, and the intermingling between native ads and editorial means the pub turns down half of the advertisers that want to work with it.

“The most challenging part of [affiliate marketing] is that no matter how you write about it, it very much feels like a recommendation to the readers. And that’s different from display advertising,” Taylor said.

Affiliate marketing sometimes suffers from a poor reputation on the brand side because of its tendency to attract fraudulent leads. But publishers are increasingly embracing the format as a way to drive ecommerce sales.

“A lot of newspapers have been hesitant to make affiliate a large part of their model – because of concerns of separating news from editorial,” Taylor said. “That’s something they have to get over. I don’t think the readers are going to punish us for that. In fact, they are telling us the exact opposite.”

Often, advertisers who work with The Penny Hoarder are doing affiliate marketing for the first time. Although the site used to work with agencies, it’s going brand-direct more frequently, which allows it to work more closely with them around content creation.

Affiliate marketing is more sustainable than display advertising, according to Taylor, because it aligns the interest of the publisher and the advertiser. “We are invested in the performance of the piece,” he said. “Because we are choosing our advertisers, we feel we have a responsibility to choose ones that will help us fulfill our mission.”

In the quest to improve the performance of its affiliate campaigns, The Penny Hoarder just signed a contract with Optimizely, which will allow it to test out two or three different intro paragraphs to see which one performs best.

The company uses Tune (once HasOffers) to monitor affiliate links. The platform includes information that can break out the performance of two links within the same post, for example.

And the publisher also plans to invest itself in custom tech to drive better results for advertisers.

“Within an hour of an advertiser going live on our site, we can tell if it’s going to be a performer or we need to go back to the drawing board,” Taylor said. “We want to build some technology ourselves that can help us optimize posts and identify the winners sooner.

Going into 2017, The Penny Hoarder plans to double everything: revenue, readership and staff. “We tripled our audience last year, and we think we can double it again this year. Our audience size directly correlates with revenue,” Taylor said.

It’s expanding more into video, and while it can be difficult to drive action from a video, The Penny Hoarder is experimenting with using specific codes or directing readers to coupons in order to drive revenue. And it’s exploring the food vertical, helping families find inexpensive but delicious meals.

While many publishers talk of scale as a commodity, The Penny Hoarder sees more scale driving more results.