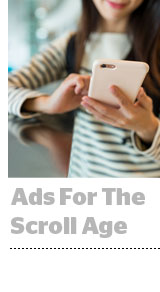 As Facebook grabs more mobile and video dollars from the ecosystem, premium publishers are looking for viable ways to compete. For storied publisher Time Inc., one solution is to bring its own mobile-optimized video solutions to market.

The Adapt unit expands to fit a user’s mobile phone size, renders when it’s 50% in view and pauses when readers scroll past the ad. The goal is to declutter the mobile ad experience while providing a unit that performs strongly for advertisers.

“We have sole control over the experience and how it renders on the page,” said Ashley Allen, director of ad solutions and products for Time Inc. “We can traffic it directly through the [DoubleClick] interface and don’t have to work with a third-party vendor,” which was previously required for rich media ads.

Google, which created the native framework for publishers to customize the ad, also benefits.

“We wanted to make sure that DoubleClick had a mobile-first format and gave publishers opportunities to generate more revenue and integrate seamlessly throughout their sites,” said Rany Ng, director of product management at Google.

The solution takes advantage of the same mobile video optimizations Google uses for YouTube, such as sending smaller or larger ads based on a reader’s bandwidth, Ng said.

In a market that faces severe supply constraints and where more than half of all inventory bought in open exchanges is fraudulent, adding the outstream format increased Time’s video inventory on its owned-and-operated properties by a factor of five. And the amount of outstream video starts doubled. Because of the added inventory, outstream revenue increased threefold.

Because outstream shows up in the content feed, a shorter message optimized for that experience can be as impactful [as a longer ad],” Allen said.

And in a market where many publishers still struggle to increase mobile web revenue to the same level as desktop, this video unit could make a difference.

“We are hoping to close that gap,” Allen said. “This is a huge opportunity to drive more revenue into mobile, and it’s something we did to fit with user behavior.”