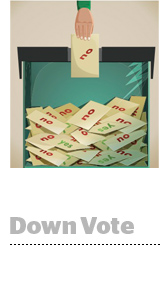 The Republican-led House voted Tuesday to kill the Federal Communication Commission’s ISP privacy rules. All it needs now is the president’s signature, and that is all but assured.

The White House issued a statement earlier in the day to say that President Trump strongly supports repealing the rules.

The House’s decision – 231 in favor, 189 in opposition – came less than a week after the Senate voted to kill off the privacy rules passed under former Commissioner Tom Wheeler.

Even before being elevated to chairman in January, current Chairman Ajit Pai loudly opposed the rules, which require internet service providers to obtain explicit consent before using a subscriber’s data, including app usage, geolocation information and web browsing, for targeting purposes.

Pai got the ball rolling on repeal in late February when he agreed to schedule a vote to reconsider the rule rollout in response to a joint petition from a coalition of advertiser trade orgs. The petitioners mainly objected to the rules because they would have laid out a different privacy standard for internet service providers and edge providers.

“Appropriately, Congress has passed a resolution to reject this approach of picking winners and losers before it takes effect,” Pai said in a statement reacting to the House vote.

Pai has also long disapproved of the FCC’s move to reclassify broadband providers as common carriers, which is what gave the commission the authority to create its ISP privacy rules in the first place.

In Pai’s view, the rules were an overreach and a usurpation of the Federal Trade Commission’s historical purview over the privacy space.

“I want the American people to know that the FCC will work with the FTC to ensure that consumers’ online privacy is protected through a consistent and comprehensive framework,” Pai stated.

Ad trade organizations gleefully responded to the news that the rules are about the hit the chopping block.

“The House and Senate got it right on the ISP regulations,” stated Emmett O’Keefe, SVP of advocacy at the Data & Marketing Association. “Today’s vote brings an end to a year of discussion over whether it was appropriate for the FCC to upend the longstanding, successful privacy framework to adopt an entirely new set of rules, which would unnecessarily burden the booming digital economy.”

Others begged to differ.

“Consumers should have the freedom to decide how their sensitive data is used. FCC Internet Privacy Rules protect that freedom. No #SJRes34,” tweeted Rep. Michelle Lynn Lujan Grisham (D-NM) minutes after the House vote rolled in.