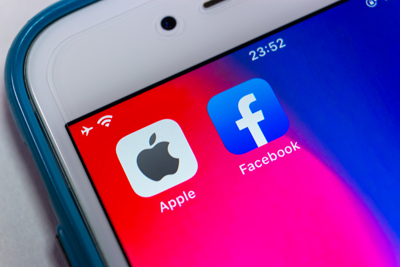 Epic Games has just finished waging its antitrust battle against Apple in the courtroom, but Facebook is taking a more subtle approach against Apple.

On Thursday, an academic paper was published by two legal and business scholars funded by Facebook. The paper offers an excoriating take on Apple’s iOS 14 policy update, which the authors call “an anticompetitive strategy disguised as a privacy-protecting measure.”

The work was co-authored by Feng Zhu, an associate professor of business administration at the Harvard Business School, and D. Daniel Sokol, a professor of law at the University of Florida Levin College of Law. Zhu and Sokol are, to be fair, very upfront about Facebook’s support of their research.

What’s most interesting here is to see Facebook putting some muscle and money behind building an antitrust case against Apple … particularly considering that Facebook is being investigated for alleged antitrust violations of its own.

Most of Zhu and Sokol’s main arguments are already hot topics of debate circulating within the advertising ecosystem.

The paper’s main takeaways fall into a few primary, interrelated buckets, including:

Zhu and Sokol claim that, by prohibiting third-party apps from engaging in broad categories of data use (which Apple “unilaterally” defines as “tracking” unless there’s an explicit user opt-in, of course), publishers and advertisers will lose their ability to effectively match consumers with relevant ads and to measure the results.

If an ad-supported business model is no longer lucrative because marketers can’t gauge it’s effectiveness, developers will increasingly turn to subscriptions and in-app purchases in order to monetize. Then, Apple will be able to take a cut. So the argument goes.

Regardless, the onus needs to be on Apple to clearly explain why its AppTrackingTransparency framework is necessary considering there are already privacy laws on the books around the world that govern data use, Zhu told AdExchanger.

During Facebook’s Q4 2020 earnings call in January, for example, Mark Zuckerberg claimed that Apple is now one of Facebook’s biggest competitors. He also knocked Apple for having ulterior motives behind the privacy changes it made in iOS 14.

“Apple may say they’re doing this to help people, but these moves clearly track their interests,” Zuckerberg, with an inflammatory flourish, told investors earlier this year. “We and others will be up against this for the foreseeable future.”