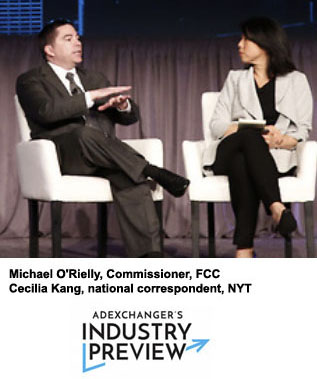 Should brands be wary of the net neutrality rollback?

The worry is that without rules to disallow it, internet service providers could block or throttle content – or prioritize their own media – with faster network speeds.

But an ISP’s goal is to make money by providing good service to the consumer, and that means providing fast network speeds, O’Rielly said.

“There is no value in throttling a particular site,” he said. The net neutrality rules were “prophylactic,” he said, meant to “stop something that wasn’t happening,” aka the supposed throttling of certain content.

Not everyone was having it.

One audience member pressed the commission on the definition of throttling. When an ISP like Verizon sells a supposedly unlimited data plan, it isn’t actually unlimited. Depending on the plan, Verizon may slow down the speed after consumers hit a certain data cap per month. “How is that not throttling?” she wanted to know.

O’Rielly fell back on the principles of the free market. The broadband provider is being transparent about what the experience is going to be, and it’s up to the consumer to decide whether to use that service or not.

It’s also a technology problem, he said. “[The ISPs] are trying to figure out how to manage how much capacity they can handle on their network given all of the users that they have.”

Even so, the notion of throttling is an enormous can of worms, said Cecilia Kang, The New York Times’ national correspondent who moderated the fireside.

Not every consumer is sophisticated enough to know exactly what’s happening in the shadows of their data plan.

“You’re asking us to trust the ISPs to say what they’re doing,” Kang said.

And internet service providers have throttled content in the past.

In 2008, Comcast admitted to throttling BitTorrent peer-to-peer file sharing, and, in July, Verizon was accused of throttling YouTube and Netflix, which it later claimed was part of a network management test and therefore not a violation of net neutrality, which was still alive and kicking at the time.

Both instances suggest there actually is a precedent for the existence of internet fast lanes and slow lanes that could not so theoretically put consumers at risk and advertisers and publishers at a network provider’s mercy in terms of ad delivery speeds.

But O’Rielly derided the entire notion of fast lane and slow lanes.

“It’s fast lanes and faster lanes,” he said. “An expressway next to the autobahn: Is one slower than the other? I guess that’s the case. But they’re both incredibly fast.”