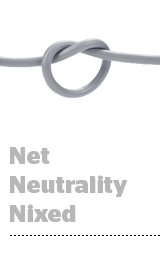 Net neutrality is dead. But not without some high drama.

In a 3–2 party-line vote Thursday, the Republican-majority Federal Communications Commission voted to repeal the Obama-era regs, which prohibit internet service providers like Verizon or Comcast from blocking, throttling or prioritizing content or from favoring their own media with better data or bandwidth.

Moments before Chairman Ajit Pai cast the deciding vote, the meeting room was briefly cleared due to a security alert.

Although the mid-vote evacuation was unexpected, the result of the vote was a foregone conclusion. Pai has been a vocal opponent of net neutrality for years.

“What is responsible for the phenomenal development of the internet?” Pai said. “Well, certainly it wasn’t heavy-handed government regulation. Quite to the contrary.”

In prepared remarks, Pai also called attention to edge providers, like Google and Twitter, as hypocritically favoring net neutrality while not providing insight into how they decide what content users see and don’t see.

“Many thrive on the business model of charging to place content in front of eyeballs – what else is Accelerated Mobile Pages or Promoted Tweets but prioritization?” Pai said. “What is worse is there is no transparency into how decisions that appear inconsistent with an open internet are made.”

In 2015, Pai was one of two dissenting votes when the Democratic-led commission voted in favor of net neutrality under former Chairman Tom Wheeler, and since, then he’s made no secret of his desire to dismantle net neutrality and “restore internet freedom,” which in his view means taking a free market approach to broadband services.

Having repealed net neutrality, Pai’s idea is for the FCC to work together with the Federal Trade Commission to police the internet while ceding authority over broadband companies to the FTC.

The FTC’s job will be to go after ISPs that engage in unfair or deceptive practices. The FCC will pinch-hit by overseeing whether ISPs are being transparent enough with their users about plans to restrict or block access to certain sites.

But what does all this mean for advertisers, publishers and ad tech vendors?

If broadband providers have the ability to create internet fast lanes and slow lanes, either by influencing the speed of delivery or by creating special content packages, advertisers would be at their mercy. ISPs could theoretically prioritize their own properties and they’d have authority over the ad delivery speed of competitors.

“If ISPs can throttle speeds, they can also unbalance the ad tech ecosystem by inflating prices for the publishers that pay more and by deprecating the ones that can’t afford to, driving ad spend to specific inventories and strangling the revenue models of smaller publishers or even advertisers with smaller budgets,” Margenat said.

“With telcos and ISPs controlling both the content and the method of distribution, there is little incentive or desire for new publishers, because their content could be harder to access compared to established publishers,” Finch said.

Internet service providers, which control the pipes, are also big content players. Verizon is making a bet with Oath, and Comcast owns a host of entertainment properties, including NBCUniversal.

“ISPs that also control content could quite clearly decide to allow preferential treatment for their own channels and content,” Margenat said. “This anti-competitive landscape would be hugely detrimental to the quality, transparency and impartiality of published content.”

But Dan Jaffe, group EVP of government relations at the Association of National Advertisers, sees the repeal of net neutrality as a net positive.

By working together, the FCC and the FTC are “trying to develop a fair and level playing field for privacy regulation putting the FTC back in a primary position,” Jaffe said.

But although the ANA is in favor of a regulatory framework that puts ISPs and edge providers on common ground under the FTC’s primary oversight, the trade org will be watching closely to see how this develops.

“If any group in digital media tries to seriously skew the ability of advertisers to reach their consumers quickly, efficiently and cost-effectively, we will clearly step in to oppose those types of efforts forcefully,” Jaffe said.

For one, advocacy groups will most likely challenge the decision in court. And there’s also a chance that Congress could overturn the FCC’s revocation, although that would require a joint resolution with approval from the House, the Senate and the president at a time when bipartisanship is an uphill battle. Several Republican senators, however, did call for the FCC to halt its vote to eliminate net neutrality.

It’s also possible that net neutrality could be upheld at the state level, despite the national repeal.

Although the FCC’s order says that local and state laws will be preempted if they’re in conflict with the commission’s efforts to deregulate the internet, on Wednesday, lawmakers in Washington State vowed to enforce their own version of net neutrality that would sanction ISPs for blocking or restricting content or for charging different rates for fast-lane access.