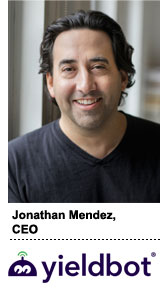 Before Yieldbot CEO Jonathan Mendez laid off one-third of the company’s employees in mid-July, the company had suffered a series of setbacks.

Then it had a bad Q1, which Mendez attributes to marketer skittishness after the election. The second quarter didn’t get much better, due to bad press about ad tech. “We lost millions of dollars in deals because of the YouTube thing,” he said, referring to the video portal’s brand safety concerns.

Yieldbot’s publisher payments were late. A month and a half ago, the company reduced staff from 124 to 82 employees, concentrating on those supporting the desktop display business. Many in client services and sales were laid off and sales offices in Chicago and Los Angeles were closed.

To help stabilize the business, Yieldbot secured $3 million in additional funding from its investors, as well as a $15 million line of credit, Mendez said.

Now it’s paying back publishers and focusing on tapping into shopper marketing budgets, which now account for 60% of all revenue, up from just 20% in 2015.

Mendez talked with AdExchanger about what happened, and how it’s moving on.

AdExchanger: Why did the layoffs happen?

JONATHAN MENDEZ: We were running two businesses in parallel, and in competition with one another, over the past two years. One business is in the shopper marketing space, focused on the mobile path to purchase. That part of the business is growing.

The other part was the search and display budget world.

In search, a lot of the budgets outside of the engines have gone to trade desks and away from search buyers. Plus, the display world requires a lot more time, effort and people power to be successful. We had to increase staffing to support that market. The outcomes that marketers are judging against are different, making it difficult to understand success.

Why is it more time-consuming to run display campaigns?

Everyone has viewability requirements, and there are whitelists and demographic requirements.

We have had campaigns where there was a list of publishers we could only run on, we had to conform to a certain percentage in Nielsen DAR [Digital Ad Ratings], and hit a viewability percentage. That’s optimizing a campaign to three different things at one time.

That’s difficult to do well, and there are more ways that something could go wrong – like a client that gave us the wrong tag, and the tag was running incorrectly for two weeks, and we have to start the campaign over again. So who pays for the two weeks of media we ran? Nobody. We have to pay for it ourselves.

Are you going to wind down the search and display budget business?

There are certain verticals we have kept in the search and display business, because they are also becoming more measured in offline action. Pharma is one. We’ve always done well there because we are cookieless, and pharmas don’t do audience-based buying because of legal restrictions.

Retail is a natural one [to keep], because retail is all about selling things. Longer term, we see the national businesses and the regional [shopper marketing] business consolidating.

You raised $35 million last August [including a $25 million line of credit Yieldbot did not end up accessing, according to Mendez]. What was that investment for?

A large portion of that raise was around header. We were going to continue building our own technology. We launched PubFood. We wanted to make sure publishers had choice and tech at their disposal, which is why we built it as an open-source solution. Right after we closed that round, server-to-server started emerging as a viable solution, and we started working on that too.

That marketplace evolved, very, very rapidly. Obviously, AppNexus did a great job with Prebid, and took a large portion of the marketplace, and moved a large part of their business to the supply side overall.

We stopped working on [our proprietary] server-to-server solution in Q2. We will continue to support PubFood, but we won’t develop it anymore. We were investing in things we were giving away to people. We needed to refocus on building things for brands, and how we can make them value us and give return on ad spend to them.

Other ad tech companies that bought media based on a secret sauce – like MaxPoint and RocketFuel – have been acquired at bargain basement prices. How do you see Yieldbot’s story playing out in light of that market consolidation?

Our board and executive team felt that what we do best is drive people to make a purchase, because our software and data focuses on consumer intent: What is the consumer doing right now, and how do we get the marketer’s message to them right now?

The digital media world has veered away from that, and toward measuring a lot of other things that have no relationship to purchase: Is it viewable? Unviewable? What site was it on? As I have seen digital media bifurcate into those areas, it was clear to us the market we want to be in, and where we want to be.

Does that mean Yieldbot had difficulty achieving high viewability rates?

We have always scored amazing on those things. Our viewability is high – I think it’s 75% in Moat, and the average is 45%. But whether someone saw the ad or not means nothing. What matters is if the ad drove them to do something, buy something or created an outcome.

I’ve heard Yieldbot described as “an ad network in a programmatic world.” Is it?

In some respects, I don’t disagree with that assessment. We have seen programmatic develop into a world of open exchanges, where trade desks are looking for impressions, and reach and frequency at the lowest cost possible. That’s where a lot of that money has gone, and that’s not what we do well. We want to be measured by clients that see they invested $250,000 in Yieldbot, and it drove $350,000 in sales.

Yieldbot held a spot in the header before it got crowded. Did your win rates suffer when more exchanges entered the header?

That hasn’t affected us at all. We are a valued header partner for our publishers. That gets to what we were saying before about Yieldbot being "an ad network in a programmatic world." To stay in the header, we have to pay our publishers a certain amount. If we were trying to grow our business into the exchange world, we wouldn’t be able to buy inventory at the prices we are paying.