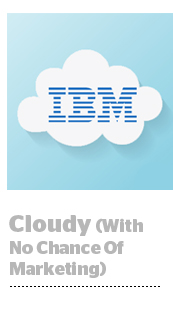 IBM is bowing out of mar tech and offloading its marketing cloud assets – for the second time.

Competition from the other scaled marketing players was fierce and Big Blue’s heart hasn’t been in it for a while.

The plan is for Centerbridge to create a new standalone company, official name TBD, from those assets, which include email marketing platform Silverpop and a handful of other capabilities from the Watson marketing portfolio, such as campaign automation, a bidding engine for display and real-time personalization.

(At least for now, IBM appears to be keeping its Watson Ads business, formerly The Weather Company.)

The spinoff follows a similar move back in December 2018 when IBM sold most of its on-premise offerings, some marketing related and some not, to HCL Technologies, an India-based global solutions company, for $1.8 billion. Site management platform WebSphere and marketing automation solution Unica were both part of that transaction.

At the time of the HCL deal, most pundits and investors surmised that IBM was being both practical and realistic in getting rid of some of its more legacy technologies so it could focus attention on building its marketing cloud, said Joe Stanhope, a VP and principal analyst at Forrester.

Which is why the Centerpoint spinoff came as a bit of a surprise, but not so much, if you think about IBM’s other big moves, including its $34 billion acquisition of open source enterprise software company Red Hat in October of last year.

Rather than scrabbling over marketshare in the marketing cloud space, where Salesforce, Adobe and Oracle have been dropping billions, IBM is focusing on core technologies and infrastructure, AI, blockchain, global services, consulting and creating a cloud environment to compete with Amazon, Google and Microsoft.

But even back when IBM seemed like it was ramping up its focus on marketing technology, there wasn’t necessarily buy in from the big wigs at the top. IBM also lost one of its marketing product cheerleaders when David Kenny, who led efforts at IBM Watson, left to take on the CEO role at Nielsen in November 2018.

“When we had conversations with them, the unit itself was quite interested in doing more, but we didn’t get the sense that there was the same commitment at the corporate level,” said Terry Kawaja, CEO and founder of investment bank LUMA Partners. “There was a kind of slowness in decisioning that calls this expression to mind: ‘She’s just not that into you.’”

And while IBM dallied, the other marketing clouds stepped up with significant acquisitions, and it became clear that marketing was not IBM’s top priority.

“The table stakes for competing in this space went up materially, and it felt like IBM maybe wasn’t prepared to participate at that level,” Kawaja said. “With deals like Red Hat, though, they’re very bullishly moving in other directions.”

What, though, of the new entity Centerbridge is spinning up around IBM’s former marketing and commerce assets and does it have a chance to compete? There’s a lot of legacy and maybe even neglected technology knocking around in there.

But there’s also a lot of good stuff, Stanhope said, pointing to the bidding engine and UBX, IBM’s behavior data exchange. And IBM is planning to work with Centerbridge on cloud and AI capabilities, which could give the new company a leg up as it tries to mature fast against the other marketing cloud biggies.

“Maintaining systems, staying modern and keeping pace with customer expectations is a tough job over time – almost every marketing cloud has struggled with this,” Stanhope said. “It’ll be interesting to see if this new company can break that trend and accelerate now that they’re separate from IBM.”