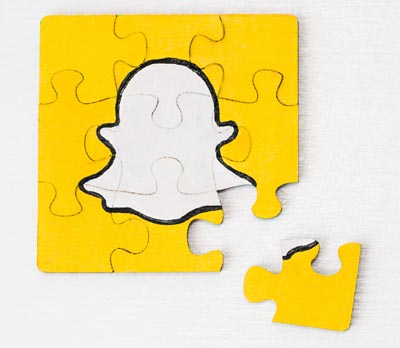 Uncertainty related to iOS 14 caused Snap’s stock to slip in after hours-trading despite beating expectations for user growth and revenue in Q4 2020.

Snapchat also doubled its advertiser count year over year in the fourth quarter and hit its highest-ever number of active advertisers (although Snap has yet to publicly share its total advertiser count).

Yet … here come those headwinds.

Snap estimates that in Q1 it will lose somewhere between $50 million and $70 million in adjusted EBITDA.

For one, Snap anticipates that Apple’s iOS platform policy changes set to roll out later this quarter will present what CFO Derek Andersen called a “risk of interruption to demand” in the period right after the policy is implemented.

“It is not yet clear what the longer term impact of those changes may be for the topline momentum of our business,” Andersen said, “and this may not be clear until several months or more after the changes are implemented.”

Jeremi Gorman, Snap’s chief business officer, noted that Snap is working closely with Apple to integrate with SKAdNetwork for measurement and also building its own solutions that will rely on aggregated data. Longer term, Snap will invest in first-party data solutions and more opportunities for on-platform conversions.

But Apple’s policy changes aren’t the only external factors that could impact Snap’s momentum, which was quite good during the second half of 2020, but slower early in the new year.

For example, Snap experienced what Andersen referred to as “a period of interruption” to advertising demand during the first two weeks of January as brands paused campaigns amid events at the US Capital.

Snap therefore entered the quarter slower than it would have otherwise expected, he said.

But this slowdown was due more to general advertiser caution as opposed to any specific concerns about the brand safety of Snap’s platform, Gorman said.

She called the pauses a “minor disruption” related to overall shifts and changes in the market.

Still too early for audience network

Although Snap first started talking about Snapchat Audience Network way back in April 2019, it had little news to share.

The Snapchat Audience Network is still firmly in the experimental phase and isn’t being factored into Snap’s growth trajectory going forward.

“It’s very early with the … Audience Network and it’s not currently a significant or material part of the business at this point in time,” Anderson said.

Although Snap’s management didn’t speak specifically about the effect of Apple’s iOS 14 changes on its nascent Audience Network, one has to wonder if it’s even possible to scale such an offering at this point.

Even Facebook, whose audience network is highly scaled, is ready to jettison the business if CPMs fall too low due to an inability to effectively personalize and measure advertising following the general release of Apple’s AppTrackingTransparency framework.