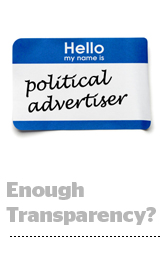 But although political ads will be clearly labeled and users will be able to access more information on who purchased the ads and how much the buyer is spending on electioneering, it’s primarily up to the advertisers to raise their hand to indicate whether an ad is political.

On Twitter, anyone looking to run an ad that refers to or advocates a clearly identified candidate for any elected office is required to self-identify as a political advertiser.

On Facebook, advertisers will need to provide more thorough documentation if they want to run political ads and may be asked to verify who they are and where they’re located. The same goes for ads on Instagram and Messenger.

The disclosure issue puts a finer point on the difference between traditional ad buys and digital ad buys on the big platforms.

While a third party, like Kantar Media’s Campaign Media Analysis Group, for example, which collects information on political TV ads, can monitor broadcast media, only the walled gardens have real visibility into themselves, even with the new transparency measures.

“It doesn’t make sense for advertisers to be in the position of disclosure,” said Mark Jablonowski, CTO and partner at DSPolitical, a liberal ad tech platform. “The only way this can function is if publishers like Facebook are mandated to collect this information and disclose it.”

Going the “advertiser disclosure route” won’t work because not all advertisers will follow the rules, he said.

“If an advertiser, say an anti-Semitic advertiser, has something to hide, they’ll try to fly under the radar as much as possible,” Jablonowski said. “That’s why the onus is on the platform selling the media.”

Facebook is working on a way to detect political advertisers that don’t “proactively disclose themselves,” according to Rob Goldman, Facebook’s VP of ads, in a blog post on Friday, who noted that Facebook is building machine-learning tools to automatically find those advertisers, after which they can be compelled to verify their identity.

The transparency feature will roll out in Canada first and hit the US next month. For the moment, Facebook will only show active political ads, but when the project expands to the US, it’s going to start work on a searchable archive that’ll include historical federal election-related ads over a rolling four-year period.

According to Facebook, the question of obfuscation is something the platform has always had to factor in for both people and businesses. Once the transparency features are fully up and running, a clearer picture should emerge on how often machine learning, combined wth Facebook’s human processes, cuts down on or eliminates advertisers that lie about their identity.

Although the proliferation of fake user and business accounts isn’t just a political issue, in recent months the large social platforms have come under increased scrutiny for Kremlin-linked activities happening on their sites and apps.

The tech giants are getting their ducks in a row before heading to Washington, DC, for scheduled colloquies with Congress. On Tuesday, top lawyers from Facebook, Twitter and Google are set to testify before the Senate Subcommittee on Crime and Terrorism about how their platforms were used by Russia to influence the 2016 presidential election. On Wednesday, they’ll face rounds two and three before the House and Senate intelligence committees.

Lawmakers have already moved to regulate online political ad disclosures in the same way they do traditional political advertising with the Honest Ads Act, a bipartisan bill introduced in mid-October.

Although Facebook, Google and Twitter have all issued official statements of support for the Honest Ads Act, they’re doubtlessly hoping their recent transparency efforts will prove to legislators that they can take care of online ad disclosures with the usual self-reg approach.

In testimony before the House information technology subcommittee on Oct. 24, Interactive Advertising Bureau CEO Randall Rothenberg said that he’s urged IAB members, which include Facebook, Google and Twitter, to “use common sense, technology systems, human oversight and cross-industry self-regulation to police their own precincts.”