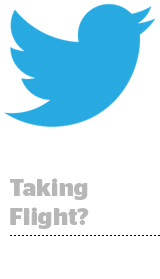 After a string of lackluster quarters, Twitter seems poised for a rebound and potential profitability, with early plans to launch RTB buying capabilities on its platform – but it’s still slow going.

Although the company beat revenue expectations for the third quarter Thursday with $590 million, that number was down 4% year over year from $616 million. Monthly active users grew by 2 million compared to last quarter, roughly on track with what analysts predicted. The daily active user (DAU) count increased 14% from Q3 2016, although Twitter still hasn’t provided a baseline number of DAUs.

The battle remains an uphill one, but Twitter does appear to be getting its ducks in a row in its bid to return to revenue growth.

On Thursday’s call, Twitter’s newly appointed CFO, Ned Segal, who took the reins in July, shared a breakdown of exactly how the headwinds have been blowing. TellApart was responsible for $40 million in drag in Q4 2016 and $20 million this past quarter. Twitter also experienced $15 million in “tough comps” for its live video product in Q4.

“The ranges of outcomes that you could back into the fourth quarter would include growth ex-TellApart,” Segal said. “It’s too early to predict when we’ll return to revenue growth, but you better believe that we’re working hard to make it happen.”

With that albatross off its balance sheet, Twitter is turning its attention to programmatic, AI and machine learning – Twitter’s hiring, CEO Jack Dorsey said – and self-serve.

Twitter is in the early stages of alpha testing programmatic buying and real-time bidding, and it’s negotiating partnerships with demand-side platforms.

The hope is to tap into premium display budgets, which Twitter isn’t accessing today, and to use programmatic to offload some of its unsold inventory. Down the line, Twitter could programmatically monetize its live video and syndicated inventory, although it would be premature to make any pronouncements, Noto said.

“We’re testing the pipes and technology right now,” he said. “Don’t expect any real impact from this for the foreseeable future because of how early it is, but we do think it’s a real opportunity and one worth investing in.”

In the meantime, while programmatic testing percolates, Twitter is giving more attention to its self-serve advertising channel, which it said returned to growth in Q3. The high-margin nature of self-serve is increasingly attractive to Twitter, which “does not have millions of advertisers like our competitive peers,” Noto said.

“A big reason why we do not is we haven’t had a ‘turn-it-on-and-forget-it’ type of advertising product, an always-on advertising product,” Noto said. “We think the self-serve channel has the potential to be that, so we’re investing in that area to see if we can find a good product market fit.”