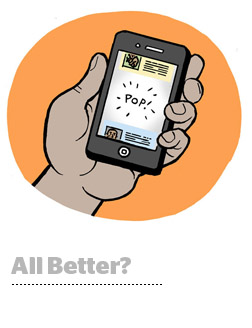 Google will turn on its built-in Chrome ad blocker on Feb. 15, meaning ad tech companies must hustle to get their products in compliance as publishers fear lost revenue.

Chrome has more than 62% of the mobile browser market share and just over 59% penetration on desktop, according to analytics firm NetMarketShare, so the change brings serious risks for publishers deemed noncompliant.

But most publishers can breathe with ease, at least for the moment. Google said Tuesday that just 1% of publishers aren’t compliant, following an ongoing audit of more than 100,000 sites across North America and Europe since June.

Google is not imposing its own standard on publishers, but rather will limit ads in Chrome to the approved formats developed by the Coalition for Better Ads (CBA), a group whose board includes the Association of National Advertisers, the Interactive Advertising Bureau, Unilever, Facebook and, yes, Google.

At least for now it’s only the most offensive ad units that are considered to be formata non grata under the coalition’s standards, such as pop-ups, sound-on autoplay video, ads that stick to the viewable window regardless of scrolling and full-screen scrollovers.

“These are clearly poor experiences that cause consumers to block ads,” said Oren Regev, managing director of creative and measurement at Sizmek.

And everyone knows it, from the advertisers and agencies that turned a blind eye to bad experiences in their quest for high viewability rates to the publishers that allowed their sites to carry those formats.

But many companies that make their name selling unconventional ad units tell AdExchanger  they don’t see the sky falling.

Mobile ad startup Parsec was forced to speed up the transition of its flagship scrollover unit to meet the Chrome deadline. The change, which only required a few code tweaks to go from overlay to in line with content, was something the company was planning to do eventually, albeit on its own timeline, rather than on Google’s.

“We’re all just living in Google’s world,” said Marc Guldimann, CEO of Parsec. “But this isn’t going to have a catastrophic impact on anyone’s business.”

“The goal since we announced this in June is for Chrome not to have to filter many sites,” said Kelsey LeBeau, who works on the team helping publishers prep for Chrome filtering. “We’re seeing more and more publishers comply, and hopefully this will only affect a small percentage of the ecosystem.”

But how did we get here? Proxy metrics are somewhat to blame.

The fact is, the market for irritating ads is evaporating, at least among premium publishers and sophisticated brands.

The immediate motivation to change is coming from Google’s countdown clock, but any ad tech vendor that wasn’t already evolving its product wasn’t reading the tea leaves (or perhaps the tea leaves were being blocked by a prestitial).

Advertisers are getting more sophisticated with their KPIs and quality publishers aren’t willing to sacrifice long-term revenue for short-term monetization.

The pendulum is swinging in the right direction, said Dan Meehan, CEO of PadSquad, which helps publishers monetize their mobile inventory with on-demand creative.

“It’s true that some companies pitched their entire business around these types of units, but they’re not screwed,” Meehan said. “They’re challenged, and they need to change.”

To change, not just for Chrome’s sake, but because advertisers such as Kimberly-Clark aren’t just chasing clicks anymore.

And even though some publishers will be losing inventory, cutting off the foot will save the leg. A better experience could lead to more time spent on site and more pages consumed per session, which would offset any revenue loss, said Scott Mulqueen, VP of programmatic strategy and operations at Meredith-owned Time Inc.

But there’s still a lot of uncertainty about how Chrome will enforce the CBA standards, and rumors have been swirling that Google will block every ad on a site after a single violation.

An email obtained by AdExchanger sent by OpenX to its partners had an alarmist tone: “This means ALL ads for sites deemed to support one or more bad ad experiences will be blocked.”

That’s not strictly the case. Google will give publishers 30 days’ notice of any violations and a chance to rectify them before Chrome starts filtering out ads – and it will take more than one ad. The threshold for blocking is 7.5% of page views with infringing ads for the first two months after the CBA effective date, followed by 5% after four months and 2.5% after that.

Publishers will receive multiple warnings throughout.

And Google says it will adhere to the definitions laid out by the CBA. “The Ad Experience Report team isn’t in a position to make an exception or assess the spirit of the standards, just the letter, or it would get too gray,” Google’s LeBeau said.

It’s that gray area that makes Kargman uneasy, though. Depending on how the Chrome filtration code is written, compliant formats could get caught up in the net intended for offenders, he said.

“The mechanism used to pop up an ad might still be the mechanism used to create other less invasive formats with better customer experience, but the code may not be able to differentiate between the two,” Kargman said. “It comes down to the program manager and the engineers to make a determination on how the code reacts, and that could have serious and negative consequences for the industry.”

Google is registering concerns from the industry.

But if there’s one piece of advice LeBeau could share with ad tech vendors, it would be to take a step back and remember: “This is less about the intent of the ad experience and all about the actual user experience. Look at this initiative from the user’s perspective and don’t design just to meet standards.”