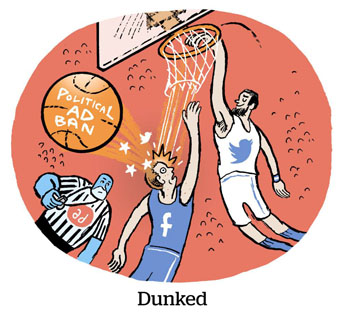 Over the last year and a half, Facebook has been embroiled in so many controversial issues, it’s hard to keep track: privacy problems, the spread of misinformation, election interference, improperly secured data, antitrust concerns and, most recently, Facebook’s policy on paid political advertising, which is rubbing nearly everyone, including some of Facebook’s own employees, the wrong way.

For the last few weeks, Zuckerberg has been insistently defending the company’s stance, which, under the guise of protecting free speech and democracy, allows politicians and political candidates to lie in ads on Facebook.

Here’s a rapid-fire review – but strap in. Facebook hits the headlines more in a week than some companies do in a year. (Click here for a Facebook timeline that takes you back to the start: “How Facebook Got Here, From The Dorm Room To The Data Scandals.”)

The New York Times reveals that Facebook had been sharing unconsented user data and friend data with device markers, including Apple, Amazon and Samsung, for around a decade.

And thanks to what Facebook called a “bug,” the private information of 14 million users was shared publicly on Facebook, even if those users had selected only to show posts to friends and family.

Facebook submits a more than 700-page document to Congress with answers to hundreds of questions Zuckerberg didn’t get to answer during his testimony a few months before.

The company’s stock nosedives after it warns investors to expect a high single-digit percentage deceleration in revenue growth in the back half of the year.

Facebook shuts down 652 fake accounts and pages with ties to Russia and Iran for engaging in “coordinated inauthentic behavior.”

… but just under a month later the American Civil Liberties Union files a complaint against Facebook for enabling gender discrimination in job ads through its ad targeting system.

Instagram founders Kevin Systrom and Mike Krieger abruptly exit the company after reportedly clashing with Zuckerberg over the direction of the product.

The following day, Facebook reveals that a security breach enabled hackers to gain access to the accounts of around 50 million users. Facebook claims there was no evidence any of the data was stolen or misused. A few days later, Facebook dispatches Carolyn Everson, its head of global marketing solutions, to Advertising Week in NYC packing the usual earnest apology.

A parliamentary committee in the United Kingdom obtains and makes public a trove of emails related to a 2015 lawsuit brought against Facebook by developer Six4Three, maker of an app that would let people find pics of their friends in bathing suits (for some reason). Six4Three alleged that a change in Facebook’s data-sharing policy drove it out of business. Although Facebook doesn’t sell user data directly, the emails demonstrate that Facebook did at one point consider charging advertisers for API access.

Facebook reveals a security bug that exposed the private photos of up to 6.8 million users to 1,500 third-party developers. Despite being required under the General Data Protection Regulation (GDPR) to disclose data breaches within 72 hours, Facebook waited two months to tell the Irish Data Protection Authority, its lead regulator in Europe, about the mishap.

TechCrunch reports that Facebook has been paying users between the ages of 13 and 35 up to $20 a month to let the company collect a wide swath of personal data through a VPN dubbed “Facebook Research.” Facebook’s involvement wasn’t disclosed to users until the sign-up process. Apple booted the app from its App Store for privacy violations as a result of the story.

Around the one-year anniversary of the Cambridge Analytica revelations, Zuck publishes a blog post expounding on the importance of data security and end-to-end encryption.

A little over a week later, Facebook is called out for storing hundreds of millions of user passwords in plain text going back, in some cases, as far as 2012.

Researchers discover that more than 540 million user records were stored on insecure Amazon Web Services servers for years. A couple of weeks later, Facebook acknowledges a separate security snafu by which it has been harvesting 1.5 million email contacts, without user knowledge or consent, since May 2016.

Zuckerberg delivers a speech at the F8 developer conference during which he declares that “the future is private.”

Facebook bans Infowars, its host Alex Jones and a host of other right-wing provocateurs for violating its policy against so-called “dangerous individuals and organizations.”

Facebook is informed by the FTC that it’s opening an antitrust investigation into the company. The FTC announces its record-breaking $5 billion settlement with Facebook on July 24 over privacy blunders. It’s the largest fine ever levied against a technology company, but many are dissatisfied with the settlement for not requiring Facebook to admit any wrongdoing.

Facebook reports earnings that same day, beats its numbers and the stock rises, buoyed by investor relief that the fine was manageable and that the FTC investigation (the privacy-related one, at least) is in the rear view.

After a long delay, Facebook slowly starts the international rollout of Off-Facebook Activity, a tool that lets Facebook users see the data that third-party apps and sites pass about them to Facebook, and then disconnect that data from their accounts. The feature is not yet available in the United States.

New York Attorney General Letitia James launches a bipartisan antitrust investigation into Facebook, with plans to examine whether Facebook engages in anticompetitive behavior to drive up ad prices. Eight state AGs sign up to participate in the probe.

Criteo files an antitrust complaint against Facebook with the French Competition Authority, claiming that “the gradual exclusion of companies from the Facebook platform has adversely impacted the diversity of the online advertising industry.”

Facebook suspends “tens of thousands” of apps from its platforms for data usage violations as part of an ongoing investigation into how third-party developers use Facebook data.

The Department of Justice reportedly launches a Facebook antitrust probe of its own, despite previously agreeing to let the FTC take the lead on FB. It’s highly irregular for two government agencies to be running parallel investigations into the same company.

Facebook settles a class-action lawsuit with advertisers over inaccurate and inflated video metrics.

In an effort to test the limits of Facebook’s political ads stance, Elizabeth Warren runs a paid post on Facebook in which she claims that Zuckerberg is endorsing Trump for reelection. (He isn’t.) Facebook lets the ad stay up, even though it contains false information.

Facebook introduces new branding for its products and services in order to differentiate the company’s corporate identity from its titular site and app. But this is more than just a cosmetic change. Facebook plans to add its multicolored new logo – FACEBOOK in all caps – and the words “from Facebook” to Instagram and WhatsApp, as in “Instagram from Facebook” and “WhatApp from Facebook.” Most people don’t know that Facebook owns these other apps, and when they find out, they form more favorable opinions of Facebook, a company whose name has become synonymous with scandal.

[The author of this article needs to lie down now.]