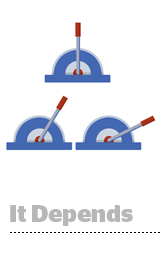 In Facebook’s view, people don’t associate the ads they scroll past in their feeds with the content they see above or below. Geisler referenced internal research that apparently proves this thesis, but Facebook declined to share any specific numbers or supporting data.

It’s a convenient viewpoint considering how difficult it is to protect for brand safety in environments that rely heavily on user-generated content, like the news feed.

Since Facebook doesn’t think ad adjacency is an issue in the news feed, the controls advertisers have there are basic. Although Facebook recommends automatic placements as the default, buyers can choose to opt out of ad placements on Facebook, Instagram and/or Messenger.

It’s a different story for Audience Network placements, ads within publisher content (aka, Instant Articles) and pre- and mid-roll video on Watch – all places where “adjacency does matter,” Geisler said.

And so advertisers have a few more controls in those environments, including inventory filters, block lists, access to a pre-campaign list of potential publishers where ads could run and publisher delivery reports they can see after the fact. Advertisers can also just decide to opt out of a placement completely.

Context is a nuanced affair, so there’s an argument to be made for enabling brand safety controls on a sliding scale depending on where an ad is running.

People may feel differently about the relationship between a standard display ad and the article in which it’s embedded than they do about a pre-roll ad that appears before a video, which could look more like an implied endorsement, said Jed Hartman, chief commercial and strategy officer at Channel Factory and former CRO at The Washington Post.

But not everyone is down with what they view as a lack of robust brand safety controls in the news feed.

“I can’t say I agree with that at all,” said a media executive at a large brand who asked to remain anonymous because it is in the process of negotiating with Facebook for more control.

“Ad adjacency is just as key in the feed as anywhere,” the executive said. “And we need our media to work really well on these platforms – especially when we’re investing as much as we are.”