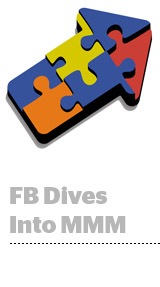 On Tuesday, Facebook rolled out a portal that lets advertisers pull campaign data for cross-channel measurement.

Only aggregated data will be available across ad formats – reach and volume of impressions by week and geographic area. But it represents another chink in the garden wall.

“We see this as a follow-through of a lot of the work we’ve done around transparency over the last few years,” said Jonathan Lewis, Facebook’s manager of measurement and identity products.

More than 150 brands and agencies are already hooked into Facebook’s MMM portal, although Facebook declined to name which ones.

MMM models historically group all of digital “in one big lump,” said Lewis, who noted that advertisers have been asking for more nuanced ROI breakdowns.

“They want to know specifically what value was created, especially to see how effective mobile is in their marketing mix,” he said.

But it’s clear that one of the main motivators here is to prove Facebook’s role in driving sales and other business outcomes. Facebook is no fan of last-touch attribution. A 2015 Datalicious report (commissioned by Facebook) found that last-click undervalues the effectiveness of Facebook display ads by 911%.

“Basically, we want to help advertisers be more strategic about how much investment they’re making in advertising on our platform with more specificity,” Lewis said. “It’s about giving them more transparency into what’s working.”

“Transparency” has become Facebook’s favorite word following the succession of miscalculated ad metric errors that broke in September, which led agencies and advertisers to call for more openness and third-party verification.

Facebook has been sensitive to the pressure, Lewis said.

In addition to the MMM rollout, Facebook also announced a laundry list of third-party verification updates on Tuesday, including viewability for in-stream video on FAN measured by Integral Ad Science and comScore, the ability to measure in-target reach across mobile and desktop through comScore’s validated Campaign Essentials and the addition of DoubleVerify to its roster of third-party partners.

Facebook also put the finishing touches on its integrations with comScore, IAS and Moat for display viewability in the news feed.

But that doesn’t change the fact that Facebook’s definition of viewability – that an ad passes from top to bottom through a person’s screen in the news feed – still differs from the industry’s time-based standard of 50% of pixels in view for one second for display and two continuous seconds for video.

That difference has been a sticking point with the buy side.

In the wake of Facebook’s metric mishaps in September, the Association of National Advertisers took issue with the fact that Facebook is not accredited by the Media Ratings Council. And at the IAB Annual Leadership Meeting in Florida on Monday, P&G Chief Brand Officer Marc Pritchard had strong words for media partners that rely on self-reported metrics.

Facebook reportedly met with the MRC in December to discuss auditing its metrics.

In the meantime, Facebook is opening itself up to third-party viewability partners so advertisers can get the data they need to make their own viewability assessments, Lewis said.

While it’s Facebook’s job to set up the integrations and pass along the data, “it’s up to the advertisers to define the standard of viewability they want to measure,” he said.

Facebook is taking the long view, and viewability is just another data point to plug into a marketing-mix model, Lewis said.

“It’s about the combination of viewability measurement and outcomes-based measurement, understanding how different viewability standards capture the value that’s created,” he said. “We think about our viewability partnerships as one input into the larger narrative around measurement – rather than losing out on value because of focusing too much on a specific standard.”