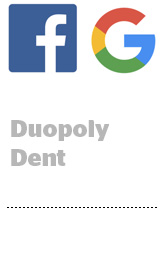 The almighty duopoly is losing share – but just a little bit.

Google and Facebook will take a 56.8% share of US digital ad spend this year, down from 58.5% in 2017, according to a report published by eMarketer on Monday. The report also predicted the duopoly’s share of new digital ad dollars entering the market this year will shrink more dramatically, to 48% from 73% in 2016.

While Google and Facebook both continue to grow in real numbers and are still far and away the most dominant digital advertising platforms in the US, competition from Amazon and Snap are eating into their market share, said Monica Pert, forecasting analyst at eMarketer.

“We’re starting to see sectors like ecommerce become more of a driver for online activity, and that has led to greater share uptake by an Amazon,” she said. “You also have on the social side stories being a real driver for activity and Snapchat reaping a lot of that benefit.”

More brands are looking at Amazon’s powerful transaction data as an engine for ecommerce advertising. And Snap’s user base is growing faster than its more established peers, giving it a greater opportunity to steal market share from aging competitors, Pert said.

Still, Amazon and Snap each still command a low single-digit fraction of the US ad market. By the end of 2018, Amazon will have a 2.7% share of US digital advertising while Snap takes a 1% share, eMarketer predicted. Google and Facebook, meanwhile, will take 37.2% and 19.6% of the market, respectively, the report said.

Amazon is growing rapidly. Ad revenues climbed 63% this year to more than $2 billion. (There has been some disagreement on this figure, with some analysts putting the number at more than twice that.)  By 2020, Amazon will almost double its share of the US ad market to 4.5% and take 1.3% of mobile revenues overall, eMarketer predicted.

“Because Amazon is marrying what you searched for with something you bought on the platform, that data is very rich,” Pert said. “That’s a key reason why marketers, especially those who sell online, are interested in working with Amazon.”

Amazon will continue growing at a rapid clip just through advertising on its ecommerce site, Pert predicted, and its share of the market will likely continue to grow as it works out its strategy with Whole Foods, Amazon Fresh and Prime Delivery. Down the road, Amazon will have the opportunity to turn on ads in other places, like Prime video.

“If we assume Amazon continues this meteoric rise of capturing more share of digital advertising, to the degree that Google and Facebook don’t own that space, they’ll lose share to Amazon,” Pert said.

Snap faces intense competition from Instagram, which has successfully cloned its most innovative features and ad units. Instagram is poised to pull in $5.5 billion dollars in ad revenue in 2018 and take a 5% share of the US ad market, eMarketer predicts.

But advertisers are still excited about Snapchat and the engagement it gets from its young, hard-to-reach audience “Snap is continuing to launch new advertising products all the time and to the degree that those are successful, advertisers will still participate,” she said.

While Snap isn’t growing its active user base as quickly as investors might like, it’s still adding users at a faster clip than other platforms given its young age. It’s therefore positioned well to grow its share of ad dollars among competitors, Pert said.

“Thinking about Facebook, Twitter and others, user growth is starting to flatten out and be closer to broad-based internet growth,” she said. “Snapchat is growing much faster than that.”

As for Twitter, its share of the market will fall to 1% this year, the report noted, below the 1.5% eMarketer predicted in September. But the platform should return to positive growth in 2019 as it builds tools to better monetize its existing audience, eMarketer said.

“Growth will come from monetizing the engaged user base they have better, rather than adding users,” she said. “The users on the platform continue to be more engaged, so expect to see continued activity around those users and pleasing them with certain content opportunities.”

In addition to competition, the duopoly is facing its own growth challenges.

As Facebook reaches maximum ad load and pricing on the news feed, it will have to rely on Instagram and nascent properties like Watch to continue growing its share of US ad revenue. And while Google is still capturing a majority of digital ad growth, its rising traffic acquisition costs are putting a damper on its bottom line.

But advertisers are still spending with the duopoly, even in the face of rising public discontent with Facebook’s and Google’s inability to police fake news and sensational content on their platforms.

“We get a lot of questions about whether intense regulation is afoot, or whether Google and Facebook’s news has affected advertiser investment,” Pert said. “From what we can tell, it has not. Advertisers are looking for the best place to target consumers. They still have that in their pockets.”