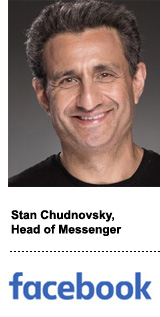 Facebook has been aggressively pushing its non-core apps to make money, a decision that caused friction between the mothership and the founders of WhatsApp and Instagram, all of whom have recently left the building.

So, where does that leave Messenger – a homegrown app with over 1.3 billion users that, thankfully for Facebook, has no independent founder to rebel?

Facebook touted Wednesday that Messenger business activity is growing and that more than 10 billion messages are exchanged between people and businesses every month, a fivefold increase in less than two years.

“It was slow at the beginning, but this tells me things are working better for more people and better for more businesses,” Messenger’s chief Stan Chudnovsky told AdExchanger during Advertising Week in New York City.

For now, the majority of that activity comes from small and medium-sized businesses, but larger enterprises are also hopping aboard.

Striking a balance between user experience and business needs is a big part of Chudnovsky’s job. But the two aren’t mutually exclusive, he said. Monetizing a messaging app is possible – a quick glance at the messaging ecosystem in Asia is proof of that, he said – the approach just has to be nuanced.

Take Messenger Stories ads, which Facebook is in the process of rolling out now. Seeing Stories ads sandwiched into organic Stories could be an acceptable part of a user’s experience on any of Facebook’s four main apps, all of which offer some version of the Stories format.

“But we would never put an ad inside a person-to-person thread, because that is a private space for people, and we don’t want to interrupt it with a third-party experience,” Chudnovsky said.

Messenger is particularly careful with its ad load. Paid placements in the Messenger news feed, for example, never appear above the fold of a user’s unread messages, where it would feel like an intrusion. That means users sometimes have to scroll to see ads.

To keep advertisers happy, the Messenger product team is experimenting with different refresh rates to ensure users see a different ad every time they open Messenger, which happens multiple times a day in most cases.

But the main question for Messenger and marketers alike is how to define success on the platform. Facebook hopes to frame Messenger ads as a utility.

Chudnovsky tells an anecdote of a man he met in Australia, where Messenger first started testing paid ads last year – an ideal scenario where the consumer clicked on a Messenger ad for solar panels, chatted with a company rep and made a purchase the next day.

And brands like Lego have seen their cost per conversion drop by more than 30% when using click-to-Messenger ads. During the holiday season last year, Lego used a gift bot to serve up personalized recommendations within Messenger itself.

But there’s value to be had for brands in messaging apps, even if they don’t make the sale. Employing automation to handle basic customer service and support issues within Messenger is another popular use case.

Ultimately though, “success is defined as real business outcomes,” Chudnovsky said, and those are set by the business. Messenger’s task is to serve those needs without messing up Messenger for its users.

“We continue to invest heavily in this space,” he said. “We think it’s the future and the best way to serve the needs of people and of businesses.”