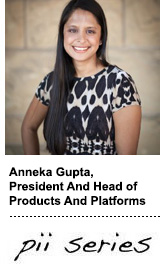 This is the latest installment in "PII," a series featuring the talent that makes the wheels turn in our data-driven advertising world.

When Anneka Gupta joined LiveRamp as her first job out of college, she didn’t foresee that she’d be co-CEO seven years later.

In fact, she didn’t even know if she wanted to be a CEO at all.

“My perception of being a CEO was that it was really isolating,” she said. “It took a long time for me to realize every leader is different.”

Over her time at LiveRamp, Gupta has worked as an engineer and ran the product management, recruitment and marketing teams. In 2017, she became co-CEO, sharing the title with head of sales James Arra. This week, LiveRamp began trading as a public company after its parent company Acxiom sold to IPG for $2.3 billion in July, and Gupta became head of products and platforms at the company.

Being a young CEO wasn’t always easy – especially managing people who are older and have more experience, Gupta said. Listening and asking questions has helped her fit into the role.

“I try to approach things from a beginner’s mindset,” she said. “What can I learn from this person or situation? How can I be constantly improving? If I hear the feedback, I can make things better.”

AdExchanger: How much did you know about LiveRamp when you joined?

ANNEKA GUPTA: When I joined, we were only 20 people. We were doing some onboarding, but we were also trying out seven or eight other products. I wanted to work at a small company in San Francisco. And I wanted the impact I was making to be big. I wasn’t focused on a specific industry. I was just looking for startups that would be a good fit.

When I joined, I wouldn’t say I really understood the product. I knew it was something to do with data and marketing, but that was the extent of it. But I liked the people. I was really drawn to how intellectually curious everyone was.

What’s been your favorite role at the company?

Product management really drew me. I liked the intersection of business and technical strategy. It was a combination of engineering and interfacing with engineers, sales and customer-facing teams to understand what the clients needed. I was also doing customer support. It was a whole mishmash of things, which was really exciting. I was learning all the time.

What made you want to stay at LiveRamp?

I’ve had so many opportunities to grow and impact the business in ways that match my career aspirations. I feel lucky that I joined a company that happened to take off. Because for every company that does, 100 others fail. And I joined a team that was avid about promoting from within and [giving them] roles that maybe they weren’t ready for, but had the desire and potential to take them on.

Did you ever think you’d become CEO when you took this job out of college?

[Laughs] I didn’t think that was quite in the cards. I didn’t know if I wanted to be a CEO. It was only a year and a half before I became CEO that I was like, “This is something I want to do.” The CEOs I knew well were very different from me.

But when you’re CEO, you get to develop the role to your strengths. You have the ability, through all the people around you, to compensate for the strengths you don’t have. It's dependent on the person, and you can be successful in many different ways.

What traits made you able to move up in the ranks so quickly?

An innate love for learning. I get bored if I don’t feel like I’m learning something new. I’m constantly looking for ways to make myself better.

When people give me feedback, I try to understand the root cause. Sometimes people see symptoms, but they can’t diagnose the root cause. It’s the same skill you need as a product manager. You're constantly thinking about what the client needs. It’s applying that to every interaction with every person and part of the business.

Did you get a lot of pushback as a younger CEO?

I had to deal with that when we got acquired. Acxiom skews much older than LiveRamp. I was dealing with people who had a lot more experience and were older than I was. I was there as the change agent, and not a lot of people were super happy with that. But even if I was young and inexperienced, I still had value to add. And the people I was working with had a lot to teach me.

It’s not always easy. LiveRamp is a key part of my identity. It’s hard, when things aren’t going well, to not to let that bleed into my life. I try to compartmentalize how I’m feeling and recognize it’s not necessarily reality. Often, I will feel imposter syndrome, but that doesn’t have to make me believe that I’m not able to do my job.

My co-CEO and I worked together for almost five years before we moved into these roles. Often, the relationship between the sales and product leaders [has] a lot of tension, but it was never that way. We’ve always collaborated. We both respect and trust each other and bring different skills to the table. We don’t bottleneck the organization. And it’s nice to have someone share the leadership burden with.

You’ve been so involved with the product since the beginning. Was it hard to step back and into a more strategic role?

It’s been hard at different stages. I love to get things done and check them off the list. I’m managing executives with their own teams, so there’s only so much I can control. I can make suggestions and set priorities, but the work is getting done many layers below me.

Figuring out how to feel like I’m adding value, even when I’m not the one doing the work, was hard. I have to be cognizant of how much I can really do. If I start trying to do stuff, that’s probably someone else’s job. But I’ve figured out ways to feel emotionally that I’m adding value. I know rationally I am.

Finding joy in the accomplishments of other people. I’ve created an environment where people can achieve whatever they’ve achieved. My job is to create the structure and bring in the right people to make this company operate as best as it can. Anything coming out of it, I have played a role in that.

LiveRamp is for sale. Where do you think it belongs?

We have an incredible opportunity. We’ve built a platform that can extend to so many use cases that we’re really just scratching the surface of. A lot of the value we’re providing is in ad tech, but we’re trying to branch out and touch every place that a brand and a consumer interact.

Every industry has an issue around data, technology and identity fragmentation. It causes them to operate less efficiently and causes decisions to be made in a less optimal way. We have an opportunity to solve those problems. That’s what I’m excited about.