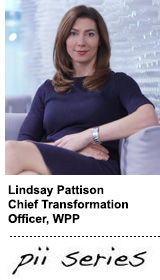 This is the latest installment in “PII,” a series featuring the talent that makes the wheels turn in our data-driven advertising world.

The former global CEO of GroupM agency Maxus was promoted to chief transformation officer of WPP last year. While the job’s purpose is largely about enabling transformation across WPP’s services and working models, Pattison has made sure diversity and inclusion were front and center after noticing stark homogeneity among her peers.

“The higher you went or the broader the role, there were less women there,” she said. “I couldn’t quite understand the reason for it.”

At Maxus, Pattison launched two diversity and inclusion programs, Walk the Talk and Mind the Gap, which help women advance to leadership roles and address workplace issues such as parental leave and the gender pay gap. As Pattison moved into a broader role at WPP, both programs expanded; this year, 235 women from GroupM alone participated in Walk the Talk.

Pattison has certainly achieved a lot during her tenure at WPP. But don’t call her a great female executive.

AdExchanger: What sparked your desire to advance gender and diversity in the workplace?

LINDSAY PATTISON: I was really happy to step up as worldwide CEO of Maxus, but it made me the only female global CEO of a media agency at that time. It felt a little bit lonely.

In 2015, I won a Women to Watch award. You have to write [a speech] looking back on how I got there. I wanted to use my position to ensure more women got to the top. So, I announced two programs. I hadn’t figured out what they were, but I figured if I announced them publicly, I would have to make them come true.

How do you make sure these programs actually have teeth?

You have to treat it seriously, not just have women on panels talking about how difficult it is.

We treated it like a proper pitch process. We wrote an RFP. We had specialist agencies pitch us on the program they’d develop. I made sure I had sponsorship from the whole organization. We had a talent and culture leader. We got all of the country CEOs to support it. I got Martin Sorrell to record videos in support of it.

We also tracked progression to understand motivation, confidence and how well networked people felt they were. We measured to understand, qualitatively and quantitatively, whether we shifted people’s ambitions, attitudes and confidence.

How do you stay motivated in the diversity fight?

I have a great job. I work in the most exciting industry. We’re influencing culture through media. We’ve got a receptive audience in pushing diverse candidates to the top of our organization. It’s not steam and mirrors anymore. It’s not a nice-to-do.

I still get irritated if I walk into a room of all white men, but I’ll call it out and we’ll fix it the next time.

What came first – your interest in media and marketing or diversity?

Media and marketing. Only as I got to the top of the pyramid, that’s when I began to notice [gender inequality]. I was lucky to have supporters and confidence, and I succeeded. But there were fewer women getting there.

Did you always know you wanted to be a CEO?

[People] assume your path is quite linear, and I don’t think it is. I’m the youngest of four. I grew up quickly and I had to shout to be heard. My siblings created a path for me and I could leap frog ahead.

A good benchmark for a child walking is about 1 year old. I walked when I was 2 1/2, which is absolutely shocking. Because I was the youngest, I would leave something and my siblings would go catch it for me, or worse, carry me where I wanted to go. So, I joke that I learned to be a CEO at age 2 1/2.

Open, influence versus control and a balance of EQ and IQ.

I lead from the front and have a clear vision, but I need and encourage people to do it themselves. My job is to instill confidence, ambition and success and appoint other people around me to put me out of a job. I really believe that. It’d be terribly boring if you thought you were right about every decision.

So, you have to be willing to be wrong.

Yeah, and show some vulnerability. There’s no value in bluffing.

I hate the expression, “Let’s take that offline.” Let’s just be transparent. We can agree or disagree, but stop having secret conversations. Stop dividing and conquering.

Is that a particular problem at holding companies where agencies are often competitive?

Most people are open to being collaborative. They understand you need multiple disciplines, approaches and voices to deliver for a client. Anybody that’s holding on to the old world and legacy structures is not long for this world.

It helps if people know and like you. So how about we don’t hire assholes would be a really good start point. In the new WPP era, there’s a great spirit of collaboration and optimism. And we don’t have too many political, egotistical maniacs.

Those people are inevitable sometimes. How do you deal with them?

You call them out. You call out bad behavior, and you reward good behavior. Some people can adapt. They figure out the land has changed. If they can’t, they keep getting called out.

What advice do you have for young women who want to be leaders in this industry?

You don’t have to act like a man or change your way of working to fit in. You can be a feminist and be feminine. You can look like a woman. You can wear makeup if you like. It doesn’t distract from the fact that you are a business leader. Bring your whole self, don’t be afraid to ask difficult questions and be really clear and firm in your perspective.

There are also some things you shouldn’t do. Don’t apologize. Don’t make the tea and don’t take notes in a meeting. Don’t fall into their traps. Being a nice person is not a weak thing.

What’s your biggest passion outside of work? You used to be a big swimmer.

God, I wish I still swam. My husband would say that’s my weak spot. There’s so much going on at work and I’m so passionate and committed, I’m slightly consumed by it.

I exercise to get my energy levels up. And I spend time with friends and my husband. I’ve got four nephews, a niece, four godchildren and three grandchildren. Keeping in touch with them takes time, but it’s rewarding. And it means I’m not talking about work all the time.