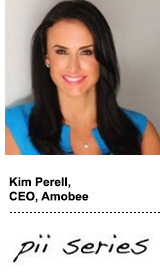 This is the latest installment in “PII,” a series featuring the talent that makes the wheels turn in our data-driven advertising world.

Kim Perell learned at a young age that it’s OK to fail.

“Failure is a great opportunity to learn,” she said. “I saw my parents fail [when I was] growing up. It was more accepted. And I’ve already been broke so, if I have to go there again, I know I’ll bounce back.”

Perell was at internet storage company xDrive when it went bankrupt in 2001. Despite building a $10 million advertising business to keep the company afloat, xDrive went under and Perell, 22 at the time, lost her job.

“It was very costly to do online data storage, and there was no monetization strategy,” she said.

That’s when she took her career into her own hands, launching digital marketing company Frontline Direct in 2003 from her kitchen in Hawaii. In 2008, she sold Frontline to European ad tech company Adconion, which went on to be acquired by SingTel’s Amobee in 2014.

“I didn’t want anyone else to control my future,” she said. “I wanted freedom.”

Today, Perell has the top job at Amobee, which has fully integrated Turn’s DSP into its stack. She wrote a book, “The Execution Factor,” which gives entrepreneurs a guide to success and will hit shelves in September. She’s also the mother of 4-year-old twins.

AdExchanger: How did you get interested in ad tech?

Kim Perrell: When I was in school – I went to Pepperdine – I had two jobs. I thought I wanted to be an investment banker, so I worked at Merrill Lynch from 6 am to noon. After that, I’d go to downtown LA and work at a direct marketing company.

I loved direct marketing. It was creative and entrepreneurial. This was `98, `99. When I graduated, I thought, everyone was going to be millionaires, I should get on this rocket ship.

How was your time at xDrive?

It was fun. I was there when they raised their first $1 million. Then they went on to raise $120 million. We were getting 10,000 free subscribers a day. I was like, “Hey, I know how to market, and advertisers would love these eyeballs.” So, the CEO said, “Let’s see if you can sell advertising.”

We called Avenue A and some other agencies, and we created an incremental revenue stream. It couldn’t sustain the company’s burns, but it gave me the opportunity to do what I’m still doing today.

What was it like for you when the company went bankrupt?

So, I had to lay off a lot of my friends. It was devastating. It was actually one of the worst times of my life. It was like someone clicked delete on my entire future.

How did you bounce back from that?

You can’t stay in bed too long hiding under your covers. The market was there. We were able to sell great sponsorships. I wanted to be in control of my own destiny and make the decisions.

So, you started Frontline Direct. Did you always want to be a CEO?

I was 23 and had no idea what I was doing. I took a loan from my grandma and self-funded it. We didn’t have an office. I moved to Hawaii with my husband and started the company with a computer and a GoDaddy account. I used the relationships I’d built with advertising agencies.

But no, I did not think I was going to be a CEO. My parents are both entrepreneurs, so it gave me a little security in the unknown. My dad, on the other hand, almost went bankrupt more times than I can count. So, you have to have the stomach for uncertainty.

What’s it like working for a Singaporean telco that’s partially owned by the government?

Amobee is run independently, so we have the best of both worlds. SingTel is very strategic. They’re playing for the long term. They’ve invested over $1 billion in digital assets, and they’re very progressive in how they leverage them.

You’re also a big angel investor. What attracts you to certain investments?

I invest in people. The most successful companies have a great leader that can execute. Innovation is a starting point, but ideas are a dime a dozen. There’s not an unlimited supply of individuals that can execute. That’s usually just ingrained in personalities.

You’re a busy person. What keeps you sane?

My twins have been the biggest joy in my life. Kids remind you how precious life is. And four is the best age. I also love traveling. I try to do two new countries a year. I’ve been to over 60.

This interview has been condensed.