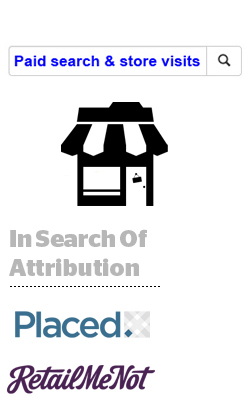 Paid search influences offline conversions, but there’s been no good way to measure that impact.

That’s because paid search, a market expected to top $36 billion this year, according to eMarketer, has been primarily used as a direct response channel, said David Shim, CEO and founder of Placed. The Snap-owned location data company released an attribution solution on Tuesday to connect search ad clicks with store visits.

“If you think about search only as direct response – someone clicks on an ad, lands on a landing page and converts – you’re only taking into account the 10% of retail that happens digitally,” Shim said. “But when the conversion happens in a store, not on a site, there’s no way to understand the impact of search on offline.”

Placed measures search clicks using a redirect. But rather than just connecting keyword clicks to landing pages, Placed also ties the clicks to its opt-in location panel of 150 million devices, which generate more than 140 billion latitude and longitude pairs every month. When someone clicks on a keyword, Placed combines modeling and raw location data to map engagement with a search ad to whatever store visit occurs later.

“As more advertising and media shift to digital, the attribution of digital to in-store is at the crux of a lot of the issues facing retailers today,” Tarleton said. “They know paid search plays a significant role, but the customer journey has become so nonlinear.”

In a test, RetailMeNot measured a handful of paid search campaigns with 10 retailer partners to see if search impacted in-store traffic, how long it took for a visit to occur and if return on ad spend (ROAS) for paid search could be associated with sales at a physical store.

RetailMeNot could also discern how long it took between someone clicking on a search ad and visiting a store location within a 14-day attribution window. Although most retail store visits attributable to the search campaigns (38%) happened within 48 hours, a fair amount (14%) didn’t take place until the last three days of the two-week window.

Being able to prove the impact of paid search on “the tail” is a helpful bit of data to have on hand, especially in the lead-up to the holiday season as consumers start researching gifts, Tarleton said.

“This supports the fact that search is a critical part of the online-to-in-store journey and shows that brands have an opportunity to influence a decision well in advance of the day of purchase,” she said. “There’s tangible ROI even later in the 14-day window, and we weren’t able to prove that before.”

But just buying keywords isn’t enough to drive people from a search ad into a store, Shim said.

“You need to combine touch points,” he said. “Beyond keywords, you need a landing page and the right messaging. Using a combination is what resonates with consumers.”

Snap acquired Placed in June for $135 million, and it continues to operate independently. The search attribution tool was developed for the broader market and isn’t yet being used by Snap.