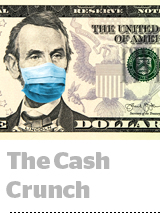 EMarketer lowered its 2020 global ad spend forecast on Thursday, revising estimates down from $712 billion to $691.7 billion due to the coronavirus pandemic’s effect on media and commerce.

That $20 billion global decline is actually an optimistic forecast, and the ad industry should expect more losses and another downward revision when eMarketer releases its next ad spend update at the end of Q3 this year.

“There are a lot of caveats in this forecast,” said eMarketer senior analyst Jasmine Enberg.

For one thing, the data for the study goes until Friday, March 6. Three days later, the US stock market fell off a cliff and major cities like New York City and San Francisco started to see a mass work-from-home exodus.

“This is a fast-moving situation and we’ve seen things change a lot since then,” Enberg said.

This report also factors in the 2020 Tokyo Olympics, which is scheduled to start in July, though the sports marketing and sponsorship industry has mentally prepared for that tentpole event to be cancelled. If the Olympics is actually cancelled, billions in ad spend across TV and digital media would evaporate.

Most of the ad spend losses in this global forecast come from China, since the virus has had more time to spread and for people to recover, so eMarketer has data to model the changes over the course of the year, Enberg said.

“In the United States, we’re not sure what the economic impacts will be,” she said.

But it is safe to say the economic impacts will be bad, and will show up in future ad spend forecasts.

Losses are racking up for the travel and hospitality industry, for example, but this forecast breaks out regions and media channels, so the pain felt by hotels, airlines, restaurants and other booking companies hasn’t showed up in the data.

And even mobile apps and digital media companies that are seeing normal or increased use rates aren’t benefitting from ad revenue.

“There’s this rise in consumption and eyeballs, but we’re also seeing advertisers pull back on digital,” Enberg said.

Online campaigns are easier to halt than TV commitments, so it’s easier to shift those budgets when brands need immediate cash flow, she said. And Google and Facebook have millions of small and mid-size businesses that may disappear from the platform as their customers stay inside.

However, the optimistic scenario for the full-year is still within the realm of possibility, Enberg said.

If the downturn lasts only a few months, marketing and manufacturing could return to normal by the end of the summer, she said. Some categories (restaurants and apparel shopping, for instance) might see a surge of pent-up demand. And, most importantly, that would mean getting at least close to the expected spending forecast for the holidays, when the bulk of annual ad budgets are in play.