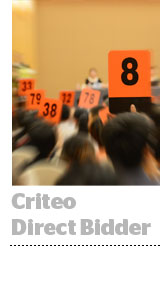 With the dynamics of header bidding changing, Criteo created a new version of its header bidding product Direct Bidder with more controls and added transparency and flexibility.

Direct Bidder, which Criteo first started developing in October, can be plugged directly into the ad server, or work within header bidding wrappers from Prebid or Index Exchange. All three implementations work identically.

More than 250 publishers signed on during the alpha and beta stages, including News Corp. and The Telegraph. Criteo hopes to eventually sign on 300 to 400 publishers in each of its key markets.

The bidder lets publishers use a first-price auction. To boost revenue for a publisher (or enrich themselves), SSPs often use dynamic floors to increase the clearing price of second-price auctions. Criteo’s Direct Bidder sidesteps these auction games and the costs they tack on to media spend.

“A lot of SSPs will add dynamic floor pricing, and those floors are not always transparent to the buyer and sometimes not even the publisher,” said Marc Grabowski, EVP of global supply and business development. “First price is one of the tools to understand where the price is going without adding [bid] shading factors.”

So if Criteo submits a $10 CPM bid in a first-price auction, it will pay $10 even if the second-highest bid is $3. That mechanic benefits publishers in auctions without many bids.

While Criteo’s first-price auction doesn’t guarantee a win (its $10 bid will have to compete with the other bids in the publisher’s header bidding wrapper), it can increase its chances to win an impression where it counts: within the ad server, where it must compete for a final time with Google demand.

Criteo’s odds improve because it is willing to pay $10 against Google if the publisher is using DFP, rather than the $3.01 it would owe if it had participated in an SSP’s second-price auction.

Publishers saw between 20% and 40% revenue increases from Criteo during the test. Criteo said these implementations did not come at a higher acquisition cost to advertisers.

Direct Bidder will support native formats and, down the line, other formats like video and in-app. Criteo said Direct Bidder also allows publishers to serve ads to users with ad blockers.

Grabowski said Criteo has been able to match web surfers using Safari browsers better with its integration with publishers, increasing audience size by 15% in some cases.

Finally– and this one is for ad tech geeks – Direct Bidder can more precisely tell the publisher’s ad server how much Criteo is willing to pay, which allows publishers to optimize their revenue sources better. “Publishers have much more granularity,” Grabowski said. “They can create more line items in the ad server than the previous RTA [first-gen header bidding] platform.”

Criteo’s strategy to bring publishers demand into the wrapper of their choosing differs from Amazon, which offers publishers a way to get Amazon’s advertising dollars, as well as outside demand, through its Transparent Ad Marketplace.

“We are not building our own wrapper,” Grabowski said. “We are trying to drive as much demand as possible, and we don’t want to do anything that will limit our access to supply.”