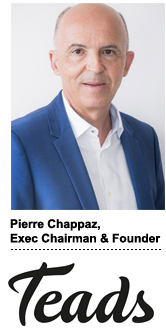 Teads might not have its stock ticker yet – the company decided to postpone a planned IPO this summer – but there are lots of other items on the immediate agenda, says Pierre Chappaz, the company’s founder and executive chairman.

The programmatic video platform, which is best known for originating the outstream ad unit, has its eye on conquering cookieless by striking data partnerships, like the recent one with Acxiom in September to make the latter’s data available through the Teads Ad Manager. And it’s evaluating potential M&A with the backing of its parent company, French telco Altice.

But Teads is also profitable today and growing organically, Chappaz said. During the 12 months ending in June, Teads saw its revenue increase 36% to $645 million.

Of course, if Teads was publicly traded and its stock price popped, it’d have a lot more money to do those deals. Just ask Magnite.

“That is one of the benefits of being a public company,” Chappaz said. “But we also have an existing shareholder in Altice with great M&A experience that’s been supportive of our ambitions. They’re with us for the long term.”

AdExchanger: Why did Teads decide to halt its IPO and what could possibly constitute a better set of market conditions for an ad tech company to go public than we have right now? Wall Street is bullish on ad tech for the first time in a long time.

PIERRE CHAPPAZ: Unfortunately, we launched our process during one of the busiest IPO calendars in recent memory. We’re confident given our differentiation in the ad tech ecosystem and our profitability that we can attract interest and demand from investors, but they were overwhelmed during the week we were willing to IPO – there were 27 other IPOs scheduled that same week, which is incredible, but it also means we didn’t get the level of attention and focus we’d hoped for.

Despite that, I think we raised the profile of Teads. We continue to work to increase that awareness. Our intent is to potentially come back and pursue our IPO in the first half of next year.

We’re focused on the premium end of the market – large brands, agencies and publishers – with an end-to-end platform that serves the buy side and the sell side. That gives us a competitive advantage in this very complex ecosystem that’s so full of inefficiencies, because you have a myriad of companies trying to connect with each other to deliver services to buyers and publishers.

But isn’t there an inherent conflict of interest in serving both the buy side and the sell side?

There used to be a traditional belief in the ad tech ecosystem that a single platform cannot serve buyers and sellers at the same time, but we’re proving them wrong. We’re working with the top spenders in the world and we have joint business partnerships with many of them that cover cookieless data, contextual targeting, creative optimization and spending commitments.

We have partnerships of this type with Apple, Samsung, McDonald’s, Mastercard, Nissan, LVMH and others, and the same is true on the publisher side. We have exclusivity for video ads inserted into articles with more than 80% of our publishers, including ESPN, The Washington Post, BBC, Vice and Der Spiegel in Germany.

We help eliminate a lot of the inefficiency in this dispersed value chain for publishers, but also for buyers, because we help them reach their cost expectations and KPIs on premium publishers within the right context.

What are the main inefficiencies you see in the supply chain today?

The biggest one – and I’d argue this is a major weakness of the ad tech ecosystem, is what happens when a DSP connects with an SSP. They need to synchronize their user IDs, which are usually cookies, and in the process, they lose a large part of the audience. We don’t have that issue because we’re end to end.

But there’s also the elephant in the room, which is cookieless. It seems like people think cookieless can wait, because there’s been a little postponement of the deadline, but, the fact is, depreciation is already here in reality. Fifty-one percent of audiences are already cookieless, so if brands and agencies don’t address this audience now, they’re blind to more than half of their customers.

Almost every ad tech company says they’re already cookieless, but a question I’d ask them is: What percentage of your revenue is generated by cookieless inventory?

Um, I should probably ask, then: What percentage of your revenue is generated by cookieless inventory?

What cookieless technology does Teads have on offer?

We’re building on our contextual targeting solution to profile cookieless users in real time. When a cookieless user lands on a certain page with a certain article, we can use machine learning to predict the profile of this cookieless user – age, gender, areas of interest, etcetera – based on the part of our audience that does have cookies and other IDs.

We’ve found that a cookieless audience can provide results that are not only equal to cookie-based targeting, but also slightly higher.

Why are the results better?

I’d say it’s probably due to the fact that cookieless inventory is less overwhelmed by ads now, because a large part of the market isn’t good at buying it yet. That means there’s less ad load. When we do benchmarks with Nielsen for audience targeting, they see the same phenomenon.

But even if the percentage of cookies decreases much further, which is likely, we’ll continue to be able to profile cookieless users. Even on Safari, about 10% of users actually still have cookies.