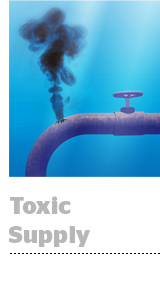 DoubleVerify, which validates tens of billions of advertiser impressions per month, has blocked 8 million ads from appearing on content pages classified as hate speech – up threefold since January.

And according to keyword targeting tech platform Grapeshot, the amount of terrorism-related content it sees flowing through its systems has doubled over the past three months.

Everything Old Is New Again

Online brand adjacency issues date back to the dawn of RTB, but concern has been ratcheting in the wake of revelations last week that extremist and offensive content was being monetized on YouTube and through Google’s ad exchange.

More than 250 brands have pulled their ad spend from both platforms indefinitely until the issue is resolved. The boycott kicked off in the UK, but quickly spread to the US when Verizon, AT&T and Johnson & Johnson suspended their non-search Google spend. JP Morgan and Lyft joined the boycott on Thursday.

This isn’t oversensitivity to a long-existing issue. The uptick in toxic supply glutting the wider internet means that there are more opportunities for that content to be monetized through advertising.

“We’ve seen a clear acceleration in content being published on questionable topics – content that would be considered inappropriate by most brands,” said DoubleVerify CEO Wayne Gattinella.

It’s far from just a Google problem. The increase can be seen even within exchanges that have made a serious and concerted effort to banish unsavory supply, like AppNexus, which undertook a major supply hygiene initiative in 2015.

Grapeshot, an AppNexus partner, immediately noticed a decline in the amount of inventory supply available at the time. Supply fell off a cliff in a good way, said Grapeshot CEO John Snyder. Less supply of higher quality is better economics than tons of junk.

But recently, Grapeshot has seen more content related to extremism creeping in, although it doesn’t necessarily get monetized if pre-bid technology nips it in bud.

Handwriting On The Wall(ed) Gardens

Although the open ecosystem clearly has its own fish to fry, the pressure for greater transparency and more third-party measurement within walled garden is mounting, which is as true for Google as it is for Facebook, Snapchat or Twitter.

What’s galling and frustrating is that Google’s brand safety problems on YouTube and the Google Display Network are mostly resolvable today, Gattinella said.

“We have the technology to solve these brand safety issues there now,” he said. “The reason the technology hasn’t been deployed is not a technical issue.”

Rather, it’s a walled garden thing.

Although Integral Ad Science has a partnership with YouTube that allows it to report on viewability – DoubleVerify, Moat and comScore have similar arrangements – IAS is not allowed to block ad serving on Google properties.

Ad verification vendor Meetrics is in a similar pickle. The company’s technology works by analyzing contextual information on a page to identify what managing director and co-founder Max von Hilgers calls “critical text,” but it can only do that if the site owner lets Meetrics run JavaScript. Most global publishers allow this, but Google decidedly does not.

“It’s come to light over the last number of months that there is a clear and present need for third-party measurement, and that it needs to be applicable across the entire web, not just the open web,” said David Hahn, chief product officer at IAS. “The walled gardens are now being held accountable, just like regular publishers.”

The slow embrace of third-party verification by the gardens is initially gratifying, but it isn’t all that helpful when an angry brand demands to know what the heck is going on with Google and brand safety.

Over the last several days, virtually every one of DoubleVerify’s major clients, including AT&T, have called to ask one tough, but quite simple, question: “We hired you to protect us from appearing adjacent to inappropriate content, so why isn’t it working on YouTube and GDN?”

The answer, Gattinella said, is also quite simple: “Google has thus far not allowed our blocking tags on their sites, and that is why we’re not technically able to block a customer’s ads from appearing on questionable content on YouTube and GDN the way we are through more than 600 ad-serving platforms.”

With that in mind, it’s hard to blame brands for withholding their spend. He/she who controls the purse strings has the power, he said.

“It speaks volumes that in the advertiser view, 100% transparency is a requirement, and anything less than that is a reason to change your media strategy,” Gattinella said. “As in many situations, it can take a bit of extreme action to cause change.”

But beyond what Google does in particular to fix its brand safety predicament – on Tuesday, Google released what will likely be the first of many updates to its brand safety controls – and at what pace those fixes fall into place, the industry needs to get more serious about the methods used for detection.

Domain-level detection, for example, is not the way forward, said Moat CEO Jonah Goodhart. Gone are the days when it was enough for a media buyer to blacklist or whitelist whole websites. Context happens at the page level.

“In the end, it’s important for brands and publishers to have transparency around where ads appear and in what context, [and] that means URL-level transparency,” which is something more brands will likely start to push for, Goodhart said.

“Brand safety concerns are not new,” he said, “but the heightened environment is causing folks to ask more question, which is healthy.”