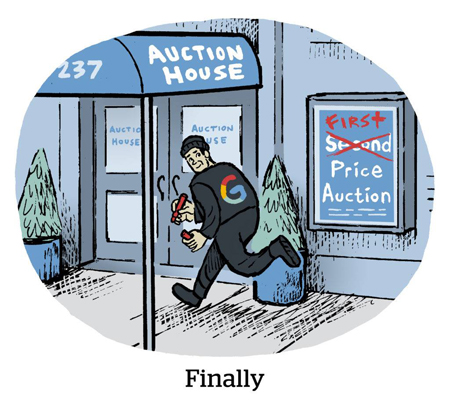 The recent shift away from second-price auctions toward a first-price model, spurred on by Google, has led to new methods for helping buyers optimize their pricing and avoid overpaying for impressions.

Bid shading is one of the most popular techniques.

But while bid shading can save buyers money, there are two interrelated complaints about it in the marketplace, said Ari Paparo, CEO and co-founder of Beeswax.

“It’s a black box, and that means the customer doesn’t control anything, so the cost for them is mysterious and often unexpectedly high,” Paparo said.

Beeswax launched its own bid shading solution in October that Paparo acknowledges is a bit late to the party but that aims to address the chronic lack of transparency associated with tactic.

First, buyers have control over the degree to which shading is applied to a given campaign. They can be aggressive and push for lower CPMs above all else, they can do a “normal” amount of bid shading or they can set the Beeswax algorithm to be less aggressive and prioritize maintaining win rates over reducing CPMs.

“For example, campaign delivery might be more important to a certain buyer than saving money, like if they’re trying to reach a rare or very high-quality audience,” Paparo said. “In that case, you don’t want to shade too much or you could potentially miss them.”

The move to first-price has made it even more crucial for accuracy in predicting bids, said Thomas Brambor, programmatic advertising lead at data agency Known (formerly Schireson Associates).

Known, whose clients include Amazon, CNN, Disney, Netflix and Unilever, runs bid shading as a continuous A/B test through Beeswax.

“This allows us to check its efficiency, but also serves as a check on our bid models,” Brambor said. “The A/B experimental setup instills the data-driven trust we need.”

Since implementing bid shading, Known has saved an average of 43% on the media costs of its banner campaigns.

Beeswax doesn’t charge directly for its bid shading solution, but instead charges a percentage of those savings. If a customer bids $2, for example, and Beeswax wins that impression at $1.50, Beeswax takes 10% of the 50 cents saved.

“The fees are fully transparent so that people aren’t surprised,” Paparo said.

During the beta period for its bid shading solution, which lasted a couple of months and ended in October, Beeswax’s clients experienced a roughly 28% price reduction. In some cases, though, and depending on the client, the savings could be as high as 40% or 50%.

“We’re seeing the most savings in video and CTV, where the prices are higher, which makes sense,” Paparo said.

Although there remains an inherent conflict in SSPs and exchanges offering bid shading solutions, as some do, DSPs don’t have that conflict. The imperative, Paparo said, is to help customers save money and get the transparency they crave.

“The move toward transparency and more control – that’s pretty much all that marketers and agencies talk about,” he said. “We’re continuing that trend here by giving people more levers, needles and dials to get the job done.”