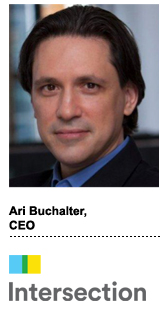 “When people talk about mobile and location, what they’re really talking about is context and making advertising relevant based on the real-world experiences they’re engaging in,” said Buchalter, who is taking over for interim CEO Dan Doctoroff, now serving as the company’s executive chairman.

The digital world is rapidly converging with the physical world and that, said Buchalter, is where Intersection plays.

“It’s physical native – the idea that we can bring advertising to the real world by improving the human experience of cities while integrating native advertising experiences into those interactions,” he said.

Buchalter spent his first five years at MediaMath as COO, later transitioning to president of technology with oversight of engineering and data science. In January, he shifted into a chief adviser role as part of an executive reorg at MediaMath, a position he held briefly before exiting to take some time off and focus, he said, on personal priorities.

But the Intersection opportunity was too interesting to pass up, he said.

“I’m taking the skills I developed in my old life creating data-driven products to power more effective marketing in the online world and applying them to the real world,” Buchalter said.

Intersection is talking with a number of ad exchanges, SSPs, DSPs and agency holding companies to make its Link inventory available programmatically. For measurement, Intersection is mulling partnerships with location vendors and looking to develop its own in-house products.

Although programmatic is often viewed as a vehicle for one-to-one targeting, most of the dollars flowing through the programmatic ecosystem are actually targeting groups of people – segments – rather than individuals, Buchalter said, “and that’s a very easy concept to translate to the Intersection world.”

“But in this case, we’d be targeting people based on their activities, experiences and purchases in the real world rather than denominating groups of people by their behaviors online,” he said. Intersection is laying down hundreds of miles of virgin fiber beneath the streets of NYC to power its network of Links – nearly 10-foot-tall structures outfitted with large digital displays that provide access to free, high-speed Wi-Fi and services like maps, directions, city info and phone calls.

So far, Intersection has installed 750 Links throughout the five boroughs with plans to scale that to 7,500 over the next couple of years, and it will launch Link in London this summer.

The company also works with municipalities across the US to dream up technologies that modernize the urban experience, including a project to digitize the Chicago Transit Authority’s media assets and the rollout of touchscreen maps in the New York subway system.

That’s a lot of inventory.

“With only 10% deployment, the Link network already rivals media like TV and radio among the New York population,” Buchalter said. “Imagine when it reaches full scale. We’ll have the largest audience reach in the New York area of any media available, and we’ll work to get the same coverage and reach in other cities.”

Intersection also brings a unique data set, everything from info about local transit authorities and local businesses to environmental data, like traffic, weather and air quality.

“These come together to paint a very rich picture of a location and the audience around it,” Buchalter said.

Intersection has already run a number of ad campaigns through its platforms, including one with real estate hunting app StreetEasy to only feature apartment listings on LinkNYC kiosks that were up to date and relevant for a particular neighborhood.

In September, the New York Lottery created an interactive tic-tac-toe experience for digital touchscreens in the New York subway system. More than 90,000 games were played, and around 50,000 users came back to play a second time.