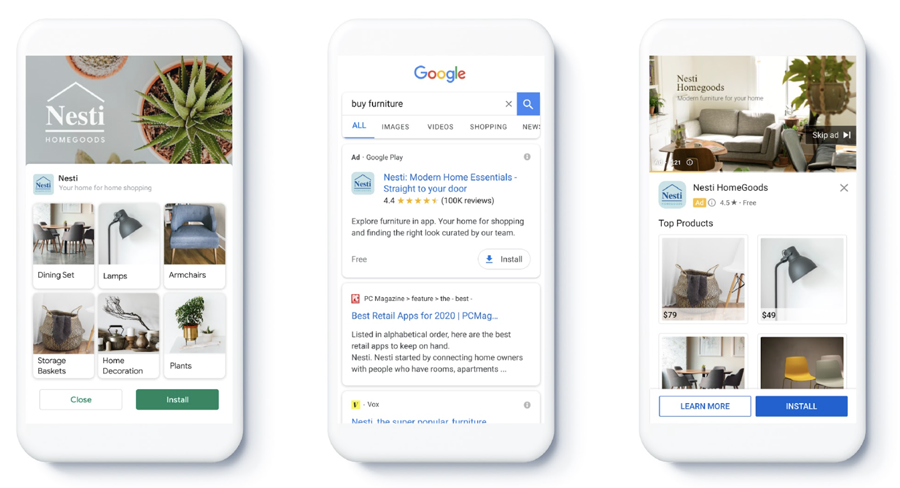 Google bolstered its deep linking offering on Wednesday by enabling from YouTube ads, Hotel ads, Gmail ads and ads in Discovery, which is the main section of the Google app.

Previously, it had only been available in search, display and Shopping ads.

The line between apps and the mobile web has been blurring for years, but marketers haven’t kept up with how consumers like to browse and buy, said David Mitby, director of product for app advertising at Google.

“Users don’t think so much about whether they’re on a website or in an app – they just want the experience to be seamless,” Mitby said.

Google is also enabling deferred deep linking, which will bring people to a specific page inside an app within 24 hours following an ad click and subsequent app download.

“This really helps with the conversion rates in the app, because the person doesn’t have to go and search for the product again,” Mitby said.

And deferred deep linking complements another feature Google is rolling out: product feeds in App campaigns.

Marketers can link their Google Merchant or business data feeds into their App campaigns to surface multiple products and services in one app ad. When someone clicks on a product featured in the ad, deferred deep linking brings them directly to the in-app product page following the app download.

This makes a lot of sense of retailers, travel advertisers and food delivery apps, but there are other non-obvious verticals that could also take advantage, Mitby said. A streaming app, for example, could display multiple shows and movies it offers, then bring a person directly to the content they want to watch once they’ve got the app.

Without deep linking, people who click on an app ad promoting a specific product would then have to search for it again once they have the app installed; if they already have the app they’d be sent to the mobile site after clicking on the ad.

And it’s a shame, Mitby said, because app users are far more valuable than mobile web visitors. Brands typically see 2x the conversion rate in apps compared with the web, he said.

Deep linking isn’t magic, though. Marketers still need to make sure they’ve got conversion tracking set up or they won’t be able to properly attribute performance or optimize their bids.

Google is also releasing a new ad destination report within AdWords so that advertisers can get a better sense of where their consumers are ending up (app or web), how they’re converting from ads and which environment is performing the best.

Rounding out the new tools is an upgraded version of Google’s Test My Site, a service that launched last year to help advertisers improve their site load times. In addition to speed testing, marketers can get customized tips on how to boost their site’s performance and enhance the overall user experience.