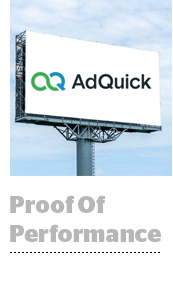 Although out-of-home is the only form of traditional media that’s still showing healthy growth, the process for placing OOH buys is time consuming and laborious.

“Some of the larger traditional agencies require eight weeks of lead time to activate an out-of-home campaign, because they’re doing it all manually with a team,” said AdQuick CEO and co-founder Matt O’Connor. “It can take hundreds of emails, phone calls, PDFs and PowerPoints back and forth to book an out-of-home campaign.”

AdQuick’s technology automates the booking process, enables optimization and provides measurement and attribution on the backend. AdQuick aggregates inventory from more than 1,000 US media owners. The biggies, such as Clear Channel and JCDecaux, make their inventory available via APIs, while smaller inventory owners can integrate with AdQuick’s software to do the same.

Marketers need better measurement to justify spending more on OOH, O’Connor said, which is why AdQuick will invest much of its newfound cash into developing more advanced analytics.

“One of the first questions you get is, ‘How do we know it’s working?’ And, historically, there hasn’t been a great answer,” he said. “Marketers need confidence.”

But marketers also need ease, which is why programmatic is on the agenda at AdQuick. Later this quarter, the company is releasing a programmatic solution to give buyers RTB access to digital billboards across the country.

Although less than 10% of billboards are digital today – most are traditional static boards – digital out-of-home is growing. DOOH spend in the United States increased by more than 10% to around $2.8 billion last year, accounting for roughly a quarter of overall spend on outdoor advertising, according to eMarketer.

“Digital marketers are used to buying in a certain way,” O’Connor said. “Programmatic can help companies that have never tried out-of-home before try it in a way they’re comfortable with.”

AdQuick also wants to grow its sales, marketing and engineering teams. With around 35 employees today, AdQuick plans to reach approximately 50 employees by late 2020 and expand its presence beyond LA.