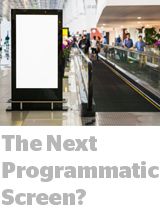 Advertisers are shifting their TV budgets to streaming platforms so quickly that demand for OTT inventory will far outstrip supply this year, Digiday reports. Currently, just a handful of streaming players sell ad inventory, though more will open up when NBC’s Peacock launches later this year and as Roku and Amazon expand their ad-supported offerings. Still, there are barriers to entry for advertisers. “I don’t know if there is going to be as much money in [streaming] given the lighter ad load and greater targetability,” said Ed Gaffney, managing partner and director of implementation research at GroupM. “If you spend in a more targeted way, your out-of-pocket [cost] is less.” Meanwhile, an influx of political ads leading up to the 2020 elections could cause the pricing on this already scarce inventory pool to spike. More.

Out-of-home (OOH) advertising will surpass print media in 2020, the Financial Times reports. On the one hand, this really marks the descent of newspapers and magazines in the overall media pie. Other traditional marketing categories such as direct mail and directories have taken hits as well. But OOH deserves recognition for tantalizing new ad formats and analytics, and increasing market share in the face of digital competitors like Google and Facebook that are crushing other legacy media. Some of the world’s leading brands and most-respected marketing orgs, notably Apple and Netflix, are all-in on OOH. Netflix even bought a Los Angeles-based OOH company known for Hollywood billboards. But growth in the category is being driven primarily by new digital screens and mobile data integrations. New digital screens account for only 5% of overall signage for JCDecaux, the world’s biggest outdoor advertising group. But those screens generate a quarter of all ad revenue. More.

Ad Spend: GDP’s Canary In The Coal Mine

A potential recession has risen to the top of the list of concerns for US CEOs. A recession in the country this year is far from a certainty, or even a likelihood. But it’s a real concern, because a recessionary mindset “can become a self-fulfilling prophecy,” according to a report by The Conference Board, an economic research group. This trend will be closely watched in the ad industry, because when CEOs are worried about the bottom line they tend to decrease ad spend and marketing vendor or agency contracts. “As long as we don’t have any guidance about where it’s going to go next, it’s very hard to make big investments,” The Conference Board chief economist Bart van Ark told The Wall Street Journal. “I don’t think the stress of this is going to go away.” More.