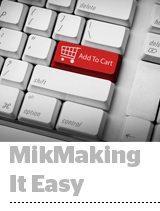 Although Amazon, Walmart and Target know which brands are sending them fruitful traffic, the brands themselves are often in the dark.

Some of the top-spending brands don’t have meaningful dot-com sales of their own, and even when they direct traffic to retailers with an affiliate link, people don’t always convert immediately or on the same device.

“Previously, we were sending traffic into a black hole,” said Jennifer Carlson, executive director of digital and ecommerce for the skin care brand Peter Thomas Roth, a MikMak client.

MikMak’s software integrates with shoppable media, which can include anything from engagement with an Instagram post or Snapchat Stories to an ecommerce ad unit or even interactive ad units for Hulu or Twitch. Instead of sending that user to a retail product page, though, the person is presented with a MikMak-operated page that offers click-to-cart options for one or more retailers.

There isn’t much consumer traction yet in terms of programmatic and digital ads driving immediate sales, said Hershey’s Chief Digital Officer Doug Straton, also a MikMak client. “But if you get the creative right and it’s easy for that shopper to transact where they expect to transact, that’s a big step up from tech available in the past.”

The MikMak integration means that the shoppers Peter Thomas Roth sends to a retail site aren’t just clicking a page, they’re adding items to a cart, Carlson said. Although the brand has only been using the MikMak tool for a few months, Carlson has hopes that it could improve conversions moving forward as the brand starts to identify better converting channels; say, if people tend to add items directly to their cart for organic social posts and influencers, but weren’t purchasing directly on paid media.

A retailer like Sephora has expectations for online and in-store traffic generated by the brands it carries, Carlson said. Understanding where and how traffic converts – or merely clicks – will make Peter Thomas Roth a much more effective lead generator.

A brand such as Hershey’s works with hundreds of stores and has to be careful not to “get into a situation where we force a customer to one or two retailers,” Straton said. If there’s a step in between that gives consumers a choice of retailers to add to their cart, it’s a more fair and effective way to pipe traffic.

Or, say the brand does want to crank up traffic with a specific retailer. It can do that, too.

And Carlson noted another potential use case for co-marketing deals with a big retailer such as Sephora or Ulta. If Peter Thomas Roth launches a product line or is running a special deal with one of those chains, it might push traffic to just one retailer instead of offering a choice between Sephora, Ulta, Amazon and the brand’s own site.