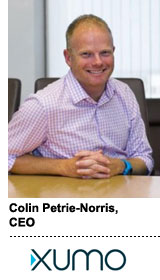 “Streaming is a growth sector,” said CEO Colin Petrie-Norris. “More users are getting familiar with streaming as an option. And in the ad-supported space, the people providing an ad-supported experience are few and far between.”

And agencies and brands aren’t dragging their feet to buy the TV-like inventory, he said. “If you look at the rate of change of budgets into a new medium, nothing has happened as quickly and dramatically as in CTV.”

Xumo got its start by coming pre-installed on TVs, with LG one of its originals. Now it’s also on places like Hisense, Vizio and Sharp. It also powers a video experience for T-Mobile and Metro PCS phones.

Xumo’s wide distribution may be why rumors have swirled over the past year that it would be acquired by a content creator, similar to how Viacom acquired Pluto. In March of last year, Sinclair Media Group was a rumored buyer. In December, The Wall Street Journal reported Comcast was in advanced talks to buy Xumo.

Petrie-Norris talked to AdExchanger about those rumors and more at CES in Las Vegas, Nevada.

AdExchanger: Sinclair and Comcast are reportedly both interested in buying Xumo. What can you share about these rumors?

COLIN PETRIE-NORRIS: We’re not going to comment on any particulars of conversations, but suffice to say we’re in a space with a very unique set of offerings, and not many companies have the distribution footprint we have.

There’s a tremendous amount of interest in the space, generally, also in Xumo. We are having discussions.

Streaming services allow content companies and content producers to have direct-to-consumer relationships. Historically you’ve had these massive middlemen. With streaming services, you can see and observe their behavior. You can modify your programming or your ad strategy to suit them, and learn a lot of new things about your customers. And if someone changes cable providers, you still retain that relationship with a customer.

Would being acquired by a content creator give you more quality content? Viacom dramatically expanded Pluto’s selection post-acquisition.

We don’t aggregate channels from multiple providers together into, say, a “Xumo cooking channel.” We have the PGA Tour channel, not a golf channel. And that does two things. First, it makes brands take ownership of their content and market it to their customers. And the relative quality of content we’re able to get [via revenue share] is much higher than if we were to license and have to write a check for $10,000 for six videos.

How difficult is it to sell CTV?

There are two big challenges. First of all, doing linear pod-based advertising is tricky. It’s not just prioritizing selling every ad at the highest price. You want to manage the ad experience, make sure you don’t have any repeating ads, and you don’t have any oversaturation of pharmaceutical ads you don’t want, for example.

Number two, there are no cookies. Contextual-based targeting, like targeting by sports channel is still really important in TV because of the lack of data in this area. But audience-based buying is emerging. We have a partnership with Tru Optik as our DMP, and we work with agency partners to enable an ad with their data so they can buy specific types of customers.

What role does programmatic play in managing yield and selling inventory?

Programmatic is hard. We’ve had to build very proprietary tech stacks that manage multiple vendors in real time to make as much yield as possible. It’s trying to change the order of providers, advertisers, changing your pod lengths, changing things by time of day and time of content. And the whole time you’re trying to optimize the difference between consumer engagement and yield. We don’t just try to make as much money as possible – we want to keep the consumer experience strong.