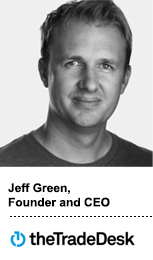 The company on Thursday rolled out a connected TV targeting and attribution tool designed to extend digital buying capabilities like retargeting and audience matching into the over-the-top environment.

According to CEO Jeff Green, connected TV inventory available through The Trade Desk increased by 10 times this year, due to partnerships with broadcasters and CTV services such as Scripps Networks Interactive and Dish’s Sling TV.

“That growth is also due to the fact that so many others – like Sony Crackle, Hulu and CBS – have added so much CTV inventory,” Green told AdExchanger.

The Trade Desk is also working to solve some of the common problems around buying ads on CTV. Targeting, for instance, used to be difficult since not all devices provided an ad ID. But Green said The Trade Desk has “added the capabilities for meaningful targeting to be applied to connected TV.”

Scale and match rates also are too low because of the different devices and operating systems in the CTV ecosystem. Green acknowledged that solving these problems remains a work in progress: “There is work that has to be done to improve scale and match rates, but that’s just a matter of time.”

Marcus Pratt, VP of insights and technology at the indie agency Mediasmith, which is beta testing The Trade Desk’s connected TV tool, said The Trade Desk is building a way to sync the DSP’s user IDs to connected TV providers’ viewer IDs.

The Trade Desk has partnered with video services such as Hulu to find ways to circumvent issues around identity resolution in CTV.

“Once that ID mapping is done, the attribution part shouldn’t be too difficult as long as we can tie those same IDs back to a Trade Desk ID to show if someone took an online action or in-store,” Pratt said. “There are still a few hoops we have to jump through, but it’s far better than what we’ve gone through with linear television.”

Although retargeting a user from digital or mobile to CTV is still imperfect, Green says the potential for closing the loop on attribution in TV is far more powerful in CTV than the targeting mechanisms available in linear TV today.

“A lot of people say there’s this whole TV infrastructure that has to change in order for linear dollars to move, but I don’t think that’s true,” Green said.

Pratt said although some of Mediasmith’s more traditional brand spenders like the efficiency of reach and frequency afforded by linear TV, they’re concerned about waste as viewership fragments to OTT devices.

“Sometimes we lose sight of the fact that the experience of linear TV is really shitty,” Green added. “You see way too many ads, and many are irrelevant. Linear television is eventually going to go away as consumers choose connected TV.”