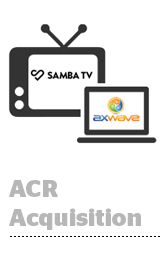 You can never have enough automated content recognition (ACR) data.

Samba TV added to its store of smart TV data on Tuesday with the acquisition of Axwave, a company that uses audio fingerprinting to catalog and measure linear TV and over-the-top content across panels in the United States and Europe, with a particular focus on the United Kingdom and Germany.

Samba is live with Axwave in the United States and United Kingdom now, with other major European markets, including Germany, France, Italy and Spain, scheduled to launch later this year.

This is Samba’s second acquisition in nine months. Samba bought cross-device graph provider Screen6 in December 2018. Same as with Screen6, Samba TV CEO and co-founder Ashwin Navin declined to share the deal price on Axwave, but did say that Samba used part of its May 2018 $30 million Series B round to finance both acquisitions.

Samba absorbed most of Axwave’s employees, roughly 20 people, bringing its total headcount to around 350.

Since it was founded in 2012, Axwave has detected and tagged 250,000 ads in the United States and more than 50,000 in Europe across 12,000 brands globally. Samba has partnerships with 14 TV manufacturers and gets its ACR data from roughly 20 million opted-in TV sets globally, but the majority (around 14.4 million) are located in the United States.

“This allows us to create a global ad schedule that brands can use without them having to send us their commercials, because we’ve already ingested them with data on reach and frequency,” Navin said. “And then we can attach first-party data for attribution.”

Unlike Samba, Inscape or other ACR data companies, Axwave doesn’t embed its technology into TVs or set-top boxes. Conceptually, it’s like Nielsen. Panelists are paid a monthly stipend to deploy the Axwave tech through their phone or a mobile people meter that sits in their living room. The meter data is matched using ACR to media-monitoring servers in the United States and Europe.

Axwave’s US panel has “tens of thousands” of people in it, Navin said. Over the years, Axwave has built specialized panels for the NBA, Ipsos and the BBC.

Samba is in the process of integrating Axwave’s TV spot detection tech into a portion of its offering that helps track the incrementality of TV advertising. The combined product should be ready to release later this year.

“One of the most common questions we get from clients,” Navin said, “is about how they can know whether the conversion rate they’re seeing from TV is causation or correlation.”

The Axwave acquisition also ties neatly in with the Screen6 deal from an analytics perspective, he said.

“Screen6 is helping us create a device graph and identity spine so we can provide research, measurement and targeting on a household or deduped basis for brands trying to figure out true reach and frequency,” Navin said. “Now we’re adding more digital and OTT exposure to that for more of a 360-degree view of how advertising is being consumed in a household.”

While these capabilities sound great, the California Consumer Protection Act goes into force just over five months from now and could put a real kink in those plans.

The Axwave data is all opt-in, because it’s panel based, Navin said, and Samba collects consent during the TV set-up process. But it’s clear that just ticking the box on privacy isn’t going to work when California enforcers start to flex their new regulatory powers.

IP address, for example, will be considered personal information under the CCPA.

“The whole OTT targeting mechanism is based on using IP as identity,” Navin said. “But that’s already illegal in Europe and it’s going to become an issue next year in the US.”

For the moment, Samba is busily integrating all the tech assets it’s bought already, but Navin wouldn’t rule out dipping into Samba’s $30 million Series B slush fund for yet another acquisition, perhaps related to helping brands make their TV insights actionable.

“That’s where we’re focusing a lot of our R&D efforts,” Navin said. “But we’ll also probably have more M&A to talk about in the not-so-distant future.”