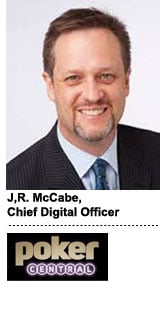 Turns out owning your own cable channel might not be the most efficient way to attract an audience.

Now the network is experimenting with new ways of distributing its content, including partnering with ESPN and NBC Sports and OTT services like Amazon-owned Twitch. It also launched its own subscription video service called PokerGo in May.

“We never had the opportunity to reach scale with cable channel distribution,” said JR McCabe, Poker Central’s chief digital officer. “It just wasn’t in the cards for us long-term. The direct-to-consumer model, in our world, allows you to super-serve a really strong enthusiast base.”

Before launching PokerGo, Poker Central sized up the market.

It realized there were two types of poker enthusiasts – the hardcore and casual fan – and an addressable audience of more than 50 million poker enthusiasts in the US (about 30% of whom are women) across digital and OTT.

“I like to make decisions with data and did a lot of that at Time Inc.,” said McCabe, referencing his last job, where he was SVP of video. “We’re doing the same thing here. We’re sizing up KPIs like session length, amount of views per program and where people were coming from.”

Although it’s early (PokerGo is not even 90 days old), McCabe’s team is beginning to evaluate month-over-month conversions, how often users replay programming and where they drop off.

“In addition, when we market to our consumers, we take advantage of the social platforms’ ability to look at lookalike audiences, because it’s just not realistic that everyone would be a poker fan,” he said.

These performance tactics mesh well with Poker Central’s stable of advertiser clients – like the Amazon App Store and Dollar Shave Club – which have to back their branding campaigns into ROI.

Emphasizing performance is particularly important for companies like Dollar Shave Club, which don’t have traditional retail partners, to hit their customer acquisition targets.

“At the end of the day, everything we do is held to a performance goal, whether our KPI is to drive razor sign-ups or membership growth,” said Gavin Carr, senior marketing manager for media and customer acquisition at Dollar Shave Club.

Poker Central’s push to a direct-to-consumer model also affords it access to new kinds of audience data that used to remain with the cable owner.

And having more insight into viewership consumption lets Poker Central court advertiser clients who hadn’t historically bought a lot of poker, but who might want to reach a majority male audience.

“There’s a lot of overlap when you look at audience from a category or consumer behavior’s perspective,” added Carr. “There is that younger millennial, male-targeted audience into e-gaming and then the poker fan, and we’re able to hit both of them at the same time, whether it’s on Twitch with Poker Central or it’s YouTube or something else.”