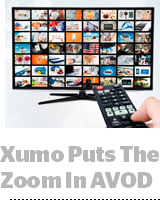 Xumo is best known for its free, ad-supported app on platforms like Roku and Apple TV. It licenses content and other networks to create a linear-like television experience.

Xumo’s ad revenue is undisclosed, but it’s a sliver of the overall TV advertising market. In April 2019, Xumo said it had surpassed 5.5 million monthly users, roughly a quarter the number of users as rival ad-supported video on demand (AVOD) service Pluto TV, which was acquired by Viacom (now ViacomCBS) for $340 million in January 2019.

Lightshed Partners, a media and tech research firm, estimates ad-supported streaming platforms earned about $3 billion in advertising in 2019, in a blog post published on Tuesday. Most of that went to Hulu, but it’s still a pittance next to linear TV’s $70 billion market in the United States.

The category is growing fast, though. Lightshed said AVOD will add more than $1 billion in new revenues this year and growth will accelerate even more in 2021.

And Xumo has an ace up its sleeve. “Unlike the other ad-supported video players, Xumo doesn’t just have an app,” said Tal Chalozin, CTO and co-founder of the video ad tech company Innovid. Xumo also comes embedded in the default software and content for some smart-TV lines, including LG TVs.

Most smart-TV viewing happens through a cable subscription or an OTT platform like Roku, Apple TV or Amazon’s Fire TV. Xumo’s pitch to smart TV manufacturers, which are trying to build their own media and advertising businesses, is that people can turn on the TV and the experience isn’t so different from linear TV, Chalozin said. Viewers can click through Xumo channels using their normal remote (instead of the much-maligned remotes that many Apple or Roku stick users must use), without plugging in OTT hardware or setting up a TV bundle.

Xumo also benefits from the consolidation of the independent OTT and streaming market.

“There isn’t much market share left,” said Forrester principal analyst Jim Nail. If the Xumo deal goes through (as is expected) and Fox closes its reported offer for the streaming app Tubi, Nail said there won’t be any independent AVOD players left with even marginal share of consumer attention.

Xumo CEO Colin Petrie-Norris said something similar in an interview with AdExchanger last month. “In the ad-supported space, the people providing an ad-supported experience are few and far between,” he said.

Nail said that, though regulators likely won’t intervene in Comcast’s deal for Xumo, the FTC could take a closer look at streaming media acquisitions.

“In the back of my mind, I am starting to wonder whether the FTC steps in on a deal like this,” he said.

The FTC surprised analysts earlier this month by blocking Edgewell’s deal for the razor startup Harry’s, citing Edgewell’s interest in acquiring the DTC because it was forcing incumbent brands (like Edgewell’s Schick razors) to lower prices. Nail said the consolidation of the media DTC disruptor set, such as Xumo and Tubi, could face a similar objection on the grounds that as independent companies they’re bringing down average Americans’ cable costs.

There aren’t reports of an antitrust dispute, he said. “But the media division of the FTC could take a look at some of these deals, especially with Fox-Tubi potentially closing soon, and say, ‘Wait a minute, we’d like to give these entrepreneurial companies a little more runway before this consolidation takes place.’”