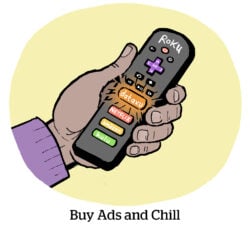 Roku’s Platform business – which includes advertising and content distribution revenue – saw its strongest quarter in the segment’s history, with revenue leaping 78% YOY to $319 million. Roku attributed the record Platform numbers to strong growth in advertising as brands embraced connected TV platforms, and the number of first-time advertisers more than doubled in Q3.

“Advertisers reassessed their TV upfront advertising commitments and moved significant portions of their investments to connected TV platforms like Roku,” founder and CEO Anthony Wood said on Thursday’s earnings call. “Advertising with Roku gave marketers significant incremental reach over linear TV, as well as advanced capabilities to target their advertising and to measure its effectiveness. Streaming is stoking innovation and giving greater choice, value and control to consumers.”

Amid the COVID-19 pandemic, CFO Steve Louden said that consumer engagement with Roku continues to grow, with users streaming 14.8 billion hours in the quarter, up 54% YOY and streaming hours per active account increasing at a more normalized rate of 9% year-over-year, as COVID-related restrictions were lifted during the summer. Roku also racked up 2.9 million incremental active accounts in Q3 to reach 46 million.

“Not only are existing brands growing spend but many new advertisers are shifting into streaming as more and more cord-cutting consumers become unreachable to brands on traditional linear television,” he said.

First-time advertiser clients more than doubled in Q3, which the company said was driven by performance marketers using its OneView ad platform. And TV advertisers focused on new products such as incremental reach guarantees, a sign that advertisers are following consumers, which helped fuel record growth.

The company said that 97% of TV advertisers that spent $1 million or more with Roku in Q3 2019 continued to invest in Q3 2020. Roku also said it closed 2021 upfront deals with “all six major agency holding companies at significantly increased levels of commitments.”

Louden did not provide guidance for Q4, but estimated that the overall Q4 YOY growth “will be roughly in line with the last few holiday seasons, which was in the mid-40% range.”

“We expect platform revenue to account for roughly two-thirds of total revenue,” he said. “We are closely tracking the potential for COVID-19 or economic related disruptions, as well as the potential impact to historical consumer spending levels or shopping patterns as we enter the holiday season. Instead, we will provide a framework on how we believe the quarter could develop.”