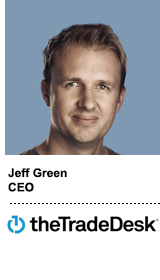 The Trade Desk continued its meteoric trajectory, when it reported Q3 revenue of $216 million on Thursday, a 32% YoY increase, and a 45% leap from the previous quarter.

Its stock price Friday morning was more than 25% and still on an upward trajectory, and it has a market cap of $38 billion as of 3pm Eastern Standard Time.

Connected TV is still a rapid area of growth, with The Trade Desk seeing a 100% YoY revenue increase.

The Trade Desk has deepened its relationship with brands and agencies, said CEO Jeff Green. And even though certain verticals are struggling mightily during the pandemic, some industries such as CPG, pharma and healthcare are leading the “recovery curve.”

What’s all this about CTV again?


Like a lot of surging stocks – Tesla, for instance – enthusiasm around The Trade Desk is more about its potential than what it’s actually doing now.

A lot of that potential is around CTV. During the company’s earnings call, Green emphasized how The Trade Desk is “winning business from linear TV and expects to continue to grab share from that $250 billion worldwide TV market.”

Green isn’t alone in saying linear TV is on the downswing. He cited a CNBC report where “three large US media companies” anticipate a 40% drop to 50 million in subscription linear TV bundles over the next five years.

As a point of contrast, Green noted that this year, advertisers can reach 80 million United States households on CTV via The Trade Desk platform.

So Green is already setting up The Trade Desk’s growing superiority in enabling TV scale.

Further, big advertisers such as P&G have decided against participating in the upfronts, and Green noted that Unilever and Mastercard also want to reevaluate traditional linear buying practices. And they are not the only advertisers pushing for this, Green said.

“Broadcast TV is a ticking time bomb, where the economics are unsustainable,” he said. “The ad to content ratio creates a terrible viewer experience. The cost of cable for the consumer is high.”

So what’s The Trade Desk doing about all of that?

Besides enabling the purchase of TV inventory through its platform, The Trade Desk is also trying to grab the really premium inventory that one normally finds in the upfront.

“We’re investing in product to help digital participate in a new version of a forward market,” Green said. “And we’re working with multiple players in the premium content space to define that. So, [we are] incredibly optimistic about our prospects in 2021 because of the secular tailwinds we have in TV for a variety of reasons, including the macro environment.”

Is this product-to-be meant to be a successor to the upfront? Or is it an adjunct? Time will tell.

What else does The Trade Desk have going?

Aside from TV, Green said The Trade Desk has a 95% retention rate, and continues to work on its core ad buying platform and will launch in 2021 “one of the biggest upgrades to our system in company history,” according to Green.

Expect an improved user interface for buying and planning, more transparent measurement, easier ways to onboard first-party data and a focus on delivering on more specific goals to clients.

“Everything about this release points to the primacy of first-party data and the ability to unlock the value of that data in an ad campaign, especially in connected TV,” Green said.

And there’s that whole identity thing …

One of the biggest initiatives for The Trade Desk has been Unified ID 2.0 – designed to help the online advertising world kick its third-party cookie addiction. Green said Unified ID 2.0 “will reach critical mass and adoption next year.”

You can get into the weeds about Unified ID 2.0’s current status, and its new partnerships with Nielsen, Criteo and LiveRamp, here.

On the mobile side, Apple will soon restrict its IDFA identifier, but Green was dismissive, noting about 10% of spend going through The Trade Desk uses IDFA, and targeting has always been limited there. So whatever happens to IDFA, don’t expect it to materially affect The Trade Desk’s business.

“We’re looking at roughly 12 million ads every single second, when you take a million-ish of those and say, we’re going to allow less data to be used on those, we just look more carefully for gems and the other 11 million,” Green said.