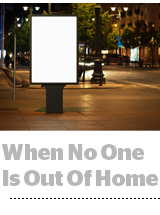 2020 was going to be a breakout year for out-of-home media.

GroupM forecasted 8% growth in the OOH category this year – the fastest-growing (and only growing) traditional media channel. And digital signage had finally reached meaningful scale and been integrated into major DSPs.

While it’s still too early for updated OOH projections, the spread of the coronavirus and mass quarantines across major cities means those expectations must be checked, as companies try and get by for weeks or possibly months without live events, travel and foot traffic, the lifeblood of the OOH industry.

“There’s no sugar-coating the fact that quarantine is about the worst thing that could happen to outdoor advertising,” said Matt O’Connor, co-founder and CEO of the OOH ad tech startup AdQuick.

For the next month or two, OOH advertisers will be in a holding pattern, he said, since there’s “no incentive to pull the trigger” on new campaigns when there aren’t events or crowded areas to target.

NinthDecimal, the location data company, normally tracks and attributes foot traffic for retailers – many of whom are now closing stores, said company president David Staas. So NinthDecimal is repackaging its data to answer questions like at what point stores in relatively unaffected markets will have to close their doors, or whether foot-traffic will hold steady for staples like coffee.

“Consumer habits seem to be changing on a daily basis right now,” Staas said. “We’re seeing a big need for any information on what those behaviors look like now.”

And there are other ways for OOH businesses to create opportunities during the crisis.

Airports and transit centers may be ghost towns, but people are still driving, O’Connor said. Many people and families in Seattle, San Francisco and New York City took road trips – not necessarily on vacation, but just to get outside the densest areas – before potential shelter-in-place warnings.

“One chance to garner some of the media dollars that would have been going to airports or subways is to shift to street-level signage and road sign inventory, since road traffic is more stable,” O’Connor said.

OOH could also be a go-to media channel for brands once quarantines lift, potentially in a month or two, he said. Television production has ground to a halt as well, so when brands are back out in force with national campaigns, OOH will be a much faster way for advertisers to get out to the public, compared to the weeks it could to take to produce the commercials and then to plan and place TV campaigns.

Staas said he is encouraged by how few national OOH campaigns for the summer have not been cancelled … yet, at least.

“If (OOH advertisers) cancel and decide to eat the major added costs by moving campaigns to TV instead, that could take weeks to execute, and maybe by that time the people they were trying to reach in San Francisco or New York City are out and about again,” Staas said.

The worst-case scenario could be the OOH industry giving up five years of steady gains, as businesses falter with near-zero revenue coming in, Stallone said.

PMD Media and other OOH companies will be fine, and could even emerge stronger relative to other categories, if the virus is contained within a few months, he said. “But if it’s not, at least a light at the end of the tunnel would give us a chance to start planning initiatives.

“Right now, the unknown is what is causing inaction with planning and booking.”