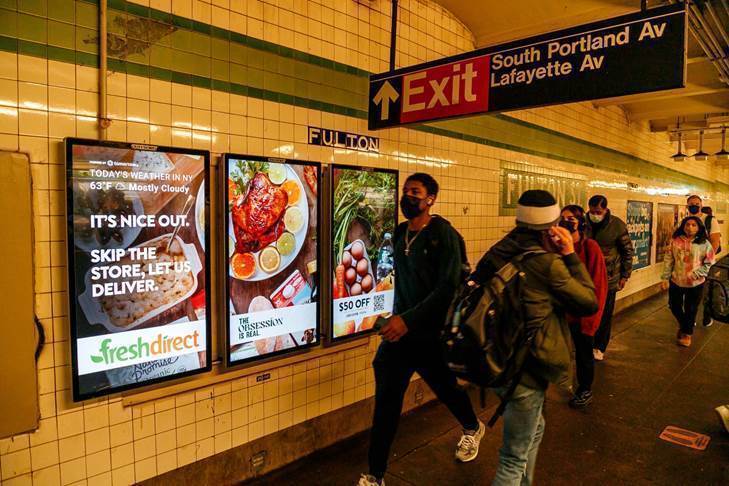 A few immutable truths about living in New York City: Almost everyone takes the subway, the weather is volatile, and most people are too busy (or lazy?) to plan what to make for dinner.

FreshDirect, a grocery delivery service based in NYC, was inspired by these realities of city life to launch a digital-out-of-home (DOOH) campaign promoting different recipes to commuters depending on the current weather.

The campaign, which ran from January 31 to March 20, was a trial to see if weather-targeted out-of-home messaging would resonate with the target audience, said FreshDirect CMO John MacDonald.

“I could just put a picture of a tomato up on one of those screens, get the impressions and call it a day,” MacDonald said, referring to the thousands of digital screens deployed across MTA subway stations and train cars.

“But we wanted to show there’s relevancy to your decisions about food,” MacDonald said, “and we wanted customers to understand that we get what’s going on in New York.”

The 15-second video ads were placed throughout the NYC subway system on OUTFRONT Media’s digital signage network. The campaign creative included QR codes that would link customers to full recipes on FreshDirect’s website, where they could also find links to purchase the necessary ingredients.

FreshDirect’s in-house creative team worked with its agency partner Quan Media Group to design the campaign and target the ideal locations to reach commuters based on location data from mobile conquesting campaigns. The campaign was also an attempt by FreshDirect to better understand how commuter traffic patterns have changed in the post-pandemic era, MacDonald said.

The recipes were created in partnership with So Yummy, a video production company that specializes in cooking videos.

The dynamic nature of FreshDirect’s DOOH campaign – the ad creative would change in response to real-time weather tracking – is more attention-getting and engaging than a typical repeating loop of content, MacDonald said.

In the post-cookie landscape, non-PII-based parameters like weather data will become more important as a vehicle for anonymized ad targeting, he said.

“We’re trying to figure out if weather matters more at certain times of the year and what really affects people’s lives in terms of rain and snow or hot versus cold,” MacDonald said. “We’ll adjust future campaigns based on these findings.”

FreshDirect measured the performance of each ad and recipe through quantitative means, including tracking impressions, site traffic and completed transactions tied to the QR codes and affiliate links. But it also tracked the campaign’s success against more qualitative measures, such as customer feedback, word of mouth and inquiries from ad industry personnel who encountered the campaign in the wild, MacDonald said.

FreshDirect is still analyzing the results of the campaign and declined to share any specific findings, but the company said it was pleased with the number of QR code scans driven by the campaign.

DOOH campaigns like this one are an increasingly valuable tool in FreshDirect’s marketing toolkit.

“We use DOOH to drive lower-funnel activity with calls to action, but we’re also using it for brand marketing and awareness,” MacDonald said. “It’s a big piece of our strategy, and it’s going to continue to be.”

Correction: An earlier version of this story said the ads were served to Outfront’s NYC subway digital signage network programmatically. The reference to programmatic placements has been removed.