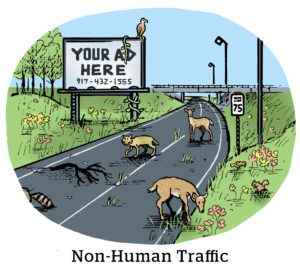 Out-of-home advertising has long been an important category for FreshDirect. It allows the grocery delivery service to reach city dwellers en masse — particularly in New York where it’s based.

But once the pandemic took hold, the company had to rethink its OOH campaigns, as subway riders and use of public transport dwindled while demand for grocery delivery skyrocketed, said Katie Zapata, FreshDirect’s head of brand marketing.

“You can’t assess with one TV commercial that you’re going to reach all of New York City, but a subway campaign reaches a large number of people, so it’s a great way to provide surround sound for our other media,” Zapata said. With fewer people riding the subway during the height of the pandemic, the company tried new street-level placements or on major highways.

Along with trying new OOH spots, FreshDirect is now upping its attribution capabilities with Quan Media, an OOH agency, and the OOH measurement tech company AdQuick.

FreshDirect could see that running OOH improved the value of other media campaigns in a market, but the company relied on promo codes in ads for any direct attribution, Zapata said.

With Quan and its integration with AdQuick, FreshDirect can connect mobile devices that pass by its OOH ads to users who visit the FreshDirect site or app. As with programmatic, it’s a way of measuring OOH based on specific audiences, instead of by the supposed value of certain contextual placements.

For instance, with the AdQuick mobile exposure data Zapata said FreshDirect determined that one undistinguished billboard in Long Island City, Queens, outperformed billboards on the West Side Highway, the Midtown Tunnel and the Lincoln Tunnel, which are some of the splashiest OOH placements in the world.

The brand can also now test its messaging and specific services. In its latest OOH campaign with Quan, Zapata said FreshDirect is splitting the promotion between its typical next-day delivery and a new same-day express offer. The company will be able to see which messages lead to more new visitors or delivery orders now that it’s attributed value to specific billboards and locations.

Many brands think of OOH as a vanity play, or as a way to boost recruitment in their home city, since there isn’t clear attribution, said Quan CEO Brian Rappaport. The analytics partnership with AdQuick empowers Quan’s clients to connect actual business results – new app sign-ups or items added to a cart – to OOH campaigns, or even to specific locations.

It also turns OOH campaigns into a funnel for retargeting. Zapata said traffic to the FreshDirect site is still the main source of retargeting audiences, but by connecting mobile devices to campaigns and online cookies, OOH is now a modest driver of retargetable audiences.

OOH media dropped off during the pandemic, especially with big brands, Rappaport said. But more data-driven DTC companies have moved back to OOH more quickly than other companies, and bring a metrics-driven approach.

“Two-thirds of the campaigns we’ve run so far in 2021 have had some measurement component,” he said. “It’s a new story and way to think about OOH than we saw before last year.”