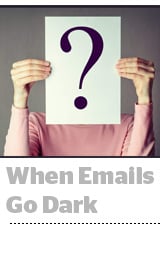 Hello, subscribers, are you there?

Newsletter operators may ask that question more often, after Apple announced new privacy protections for email users earlier this month at the company’s annual Worldwide Developers Conference. Specifically, Apple introduced “Hide my Email,” a feature that generates fake email addresses that forward to someone’s real address, so people can sign up for newsletters or complete digital registrations without giving away their email to any company except Apple.

If Hide my Email becomes a popular feature among iOS users, it could be a wrench in the gears of first-party data collection and online identity resolution. But will it reach critical mass? Perhaps not.

For one thing, the feature seems to apply only to a narrow slice of the mobile consumer base – Apple audiences who have the latest iOS, are logged in to iCloud and use the native Apple Mail app as their email service.

Two years ago, Apple introduced a single sign-on service that let iOS users store login credentials with Apple, which is mandatory for any apps that offer other login services like Google or Facebook, and that single sign-on also blocks the email address from the developer or publisher, said LiveRamp SVP of addressability and ecosystem Travis Clinger. But it’s not a much-used service and never impacted LiveRamp’s identity graph, he said.

But for newsletter providers, Hide my Email may be an analytics disaster for any entirely different reason.

In addition to offering users the option to anonymize their email addresses, Apple will remove the tracking pixel attached to emails – which is how senders see if a recipient opened their email.

Open rates are like the “check engine” light for newsletter and email list operators, said Dan Oshinsky, an email consultant and former director of newsletters at The New Yorker and BuzzFeed, in a blog post on the Apple email news. In other words, open rates on their own don’t tell you much, except that something is going wrong.

If a newsletter is suddenly going to spam folders instead of the inbox, for example, that would surface as a suspiciously low open rate. Email service providers like Google and Apple also make decisions about whether a sender should go to spam based partly on how well they maintain their email lists (aka weeding out unresponsive emails). Without the open rate data, it becomes much harder to prune email lists for disinterested accounts.

On top of that, sponsored newsletters are often sold based on open rates, as opposed to on overall email list size. So the change could make life harder email-based ad sellers.

There is, however, an element of uncertainty about the pixel-blocking policy, since Apple activates the pixel at the moment it is cleared before forwarding an email to a user’s address. Newsletter providers may not know if their iOS users will suddenly show up with open rates of zero or near 100%. Either way the data would be useless.

It’s a tough pill to swallow for many publishers, said Alex Cone, the IAB Tech Lab’s VP of privacy and data protection.

Publishers have lately increased their collection of emails in part to follow Apple’s own guidance to establish first-party relationships. In many cases, they have used language proposed directly by Apple to collect those email addresses. Now Apple may pull the rug out.

“This isn’t a new trend around emails,” Cone said. “It’s a new dynamic in this power struggle over who is the first party: Is it the platform, or is it a brand or publisher?”

The Hide my Email feature may also open up loopholes that plague publishers and content companies. For instance, if publishers can’t recognize an individual by email address, someone could keep signing up for free trials for any app or subscription without detection. It would be up to Apple to monitor for that behavior and stop it of its own accord.

And there’s no mechanism for publishers, brands or developers to lobby Apple for changes, Cone said. The Safari team has the W3C, where browser-based changes are debated, but the operating system has no similar forum or working groups for industry access, he said.

“Apple’s tracking policy specifically says, if a user shares an email with consent it can be used for site tracking, so why are they making this harder?” he said.

Apple has a straightforward pitch to its own customers – marketers and spammy email senders monitor when you open their email, and we’re going to block it. But the reality for publishers and the mobile ecosystem is far more complicated.

“Every year with these Apple announcements, as an Apple customer, I’m eager to see what new features they’re bringing,” Clinger said. “Then there’s the ad tech box, where you wonder how these things will work now.”