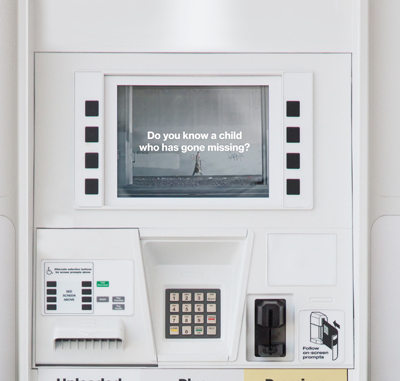 People who pull off the road to a gas station are an audience both waiting and on the go.

Someone fueling up provides a good opportunity to serve video ads at the pump for candy and soda brands available at the convenience store invariably located a few steps away.

But gas stations are also one of the few places where missing children are sighted. Kidnappers or other predators stop there for gas. Runaways often come to use the bathroom or buy a snack at the service station.

Since 2019, the National Center for Missing and Exploited Children (NCMEC) has been partnering with GSTV to display missing children posters on gas-pump screens across the country.

Today, there are 22,000 participating stations across the US, which gives GSTV’s network a potential reach of 96 million – more than one in three – American adults each month across 48 states.

“Missing children cases happen in the blink of an eye, and every moment is crucial to recovery,” said Callahan Walsh, executive director of the Florida branch of NCMEC, which his parents, John and Reve Walsh, founded in 1984 after their son, Callahan’s brother, Adam, was kidnapped and murdered in 1981. John Walsh was later the long-time host of America’s Most Wanted for its more than 20-year run.

NCMEC started working with GSTV in 2019 to share photos and info about missing children. GSTV donates the inventory and ad ops employee time to process and traffic the creative that comes in from NCMEC.

GSTV’s video network enables targeting using IP addresses down to the specific gas station level, which means it’s possible to publicize the faces of missing children in near real time by state or region.

The geotargeting aspect is particularly important, Walsh said, so as not to inadvertently desensitize people to this type of messaging.

In one recent case, a child actually saw a poster of themselves on a GSTV screen.

“This was a runaway child who didn't fully understand the severity of their situation or that their family was looking for them – when parents and family are going through something like this, it’s the worst moment in their lives, and the not knowing is the hardest part,” Walsh said. “The child called in, and it was a safe recovery and reunification, just one example of many.”

Of the 243 missing children featured on GSTV displays since the start of the partnership more than two years ago, 154 have been recovered.

“At any given time on a single day, missing children posters are running across around half of our network across 25 states, and it changes rapidly based on shifting needs,” said Violeta Ivezaj, SVP of business operations at GSTV.

Beyond being able to quickly distribute digital posters, GSTV is able to quickly take images out of circulation once a child has been recovered or a case is closed – which is very different from the classic milk-carton method.

Agility is also particularly important when trying to roll with unprecedented situations, like the pandemic. Everyone – including kids – spent a lot more time online than usual during the first year of COVID, and this led to a rise in cases of child exploitation and sex trafficking.

NCMEC runs a tip line where all the major ISPs and members of the public can report any suspicious activity they observe. During 2019, more than 16 million children were suspected to have been exploited online – a number that rose roughly 26% to 21.7 million in 2020.

That uptick makes the speed of information even more critical.

When a child goes missing, Walsh said, “you want as much attention on them as fast as possible.”

“That’s why we send our most critical cases to GSTV,” Walsh said. “Certain cases don’t get traditional media attention unless there’s a break, but GSTV doesn’t care – we tell them which cases we think need attention, and they go up on the network right away, including older cases,” he said. “Older cases are just as important, and we’ve seen too many long recoveries to give up hope. Just look at Elizabeth Smart, Jaycee Dugard and the Cleveland girls.”