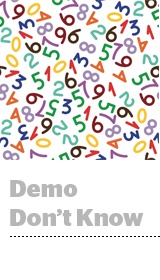 Age is one of digital advertising’s most basic demographic targeting parameters – but most of the age data available across mobile exchanges is unreliable, according to mobile data company Pinsight Media.

In a report released Wednesday, Pinsight, a wholly owned independent subsidiary of Sprint, found that 72% of ad requests on exchanges do not include age data. But even when ages are associated, 60% of that data is inaccurate. Pinsight declined to share the names of the exchanges it examined.

The open exchange isn’t always known for highly accurate data. Although there’s been a concerted cleanup effort, exchanges have been a notoriously lackluster source of location data, for example.

But age data, unlike location data, is a de rigueur targeting tactic – and as it stands, age data leaves something to be desired.

“If you start off with a faulty premise, the spend will become inefficient,” said Pinsight VP Kevin McGinnis.

In other words, even small errors can cause a series of cascading failures. Gender data, for example, tends to be fairly accurate. But combine that with an inaccurate data point and there’s a problem. If you think someone is 40 and they’re actually 25, it doesn’t matter all that much whether you know that person’s gender.

For its age data accuracy study, Pinsight matched the first-party device IDs it has access to through relationships with Sprint, Virgin Mobile, Virgin Evolution, MetroPCS, TracFone Wireless, Boost Mobile and Q Link Wireless with unique device identifiers it saw on the exchanges. The sample size was slightly more than 1 million users.

By comparing first-party carrier-level age data with age data submitted within ad requests across mobile exchanges, Pinsight could determine the veracity of the age data available within an exchange.

“We know the unique identifier for the device and if we see the same ID passed on the exchange, from there it’s simple to join it back to the account information,” Habiger said.

When there was age data available, which was less than 30% of the time, Pinsight found that it was off by about 10 years.

Pinsight also noticed that even when ages were provided, there was no info on how the numbers were derived – probabilistically, estimated or actual. There was also no consistency in how the numbers were conveyed, such as whether it was part of an age range bucket or what’s known as an age bin.

If an exchange groups its users in an 18- to 34-year-old range, for example, there’s no clear way for an advertiser to know where on the spectrum most of those users fall. And there’s a big difference between an 18-year-old and a 34-year-old.

“Advertisers and their agencies need to be better educated about this data,” Habiger said. “They need to know more about the data source and they need to know the type of data they’re buying against.”

It was difficult for Pinsight to pinpoint exactly why age data is so spotty on the open exchange. It could be that exchanges are excluding some age data outright because they know it’s inaccurate, McGinnis said. Maybe some exchanges have a quality control issue. Or perhaps the data just isn’t there at scale on mobile exchanges yet.

The fact is the mobile programmatic space is still nascent, McGinnis said. It’s only going to grow if there is “more transparency around things like data source, methodology and freshness,” he said.

“Those elements are really important for performance,” McGinnis said. “At the end of the day, if the performance is not there, people will move away from buying against things that they don’t understand – and that’s bad for everyone in mobile.”

The best thing the buy side can do is to ask lots of specific questions about the data they’re buying against, Habiger said.

What’s the reach? What’s the distribution of age data across a particular platform? By which methodology was the data collected? Through cookies? Device fingerprinting? How frequently is the data updated? If a vendor claims to have certain age groups in a certain geographical area, what does the population of that area actually look like?

“There’s a lot of statistical digging people can do to verify that the vendors they’re using are on the up and up,” Habiger said.

The buy side needs to make sure it’s not buying junk.

“Everybody’s got a DMP these days – now it’s about shifting the conversation toward intelligence, and that means getting smart about the source and the methodology,” McGinnis said. “There are two big themes we’ll see in 2017: data veracity and data velocity. It’s all about data accuracy and freshness. Ask about that.”